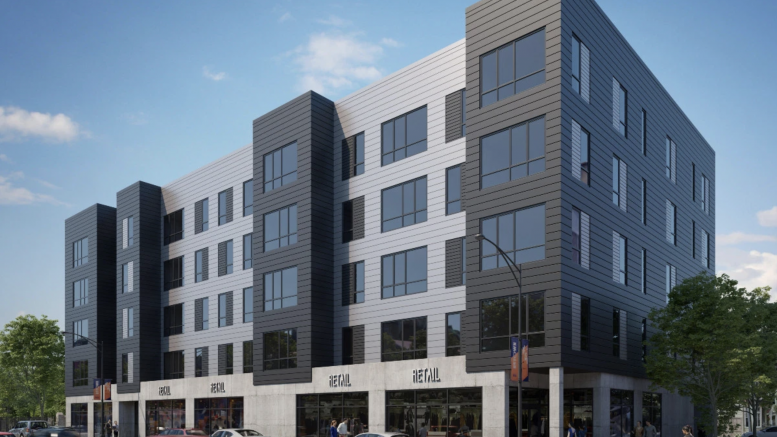 Permits have been filed for a five-story mixed-use building at 4806 N Magnolia Avenue in Uptown, between the southeast corner of St. Boniface Catholic Cemetery and the intersection of N Magnolia Avenue and W Lawrence Avenue. The lot sits just two blocks west of the Lawrence CTA L station serviced by the red line and purple express line. The nearby CTA bus 22 and 81 lines also stop at the intersection of N Broadway and W Lawrence Avenue, a two-minute walk East.

The permit lists 1236-48 W Lawrence, LLC as the site’s owner, but Block Club Chicago recently reported that JAB Real Estate is involved in the project.

According to the renderings, the project known as “The Balaban” will have a facade that incorporates both light and dark elements. White masonry on the ground floor then transitions to what appears to be pale metal panels. Adding interest to the grid of windows are four slightly protruding partitions wrapped in black cladding.

View of 4806 N Magnolia Ave from its East side via Google Maps.

The structure will have ground-floor retail, with the four floors above housing 54 apartment units. Additionally, the building will include 27 exterior parking spaces. The height and square footage of the development is not currently known.