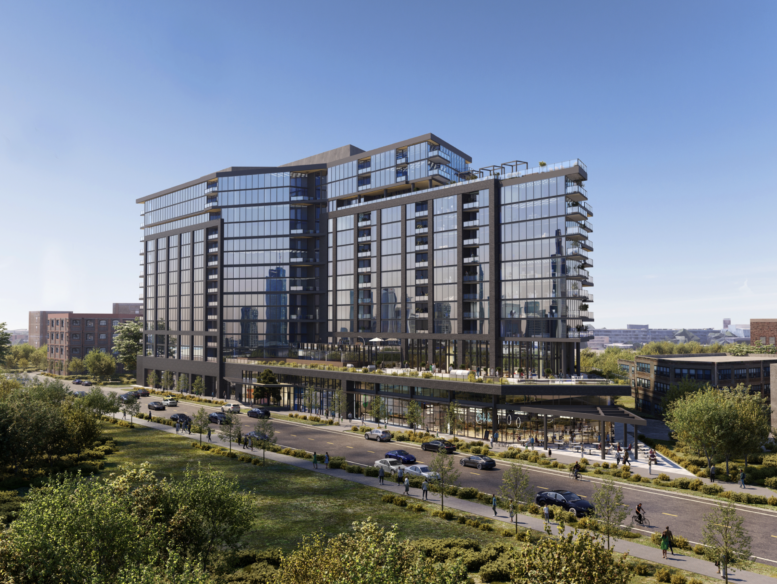 Sterling Bay, the real estate developer behind the $6 billion Lincoln Yards masterplan, has revealed plans for a new 15-story apartment building directly to its east in Lincoln Park. The project faces Sterling Bay’s mega-assemblage from across the North Branch river, calling for 359 new units on a parcel addressed as 2031-2033 N Kingsbury Avenue. Of the total unit count, 36 on-site residences will be affordable. In addition, Sterling Bay will contribute $5.1 million to the city affordable housing fund. The Chicago-based developer has partnered with Lone Star Fund as a joint venture, further continuing their collaboration beyond Lincoln Yards.

Pappageorge Haymes has designed the 168-foot-tall building, whose massing features multiple setbacks and angles that vaguely mimic the bending of the river. These setbacks will be topped with various outdoor amenity spaces, outfitted with grills, cabanas, lounge areas, and a pool. There will also be private terraces along portions of the setbacks, along with both inset and overhanging balconies attached to select units. The facade itself will be a mix of face brick, metal floor slips, and large floor-to-ceiling glass panes.

Occupying former steel mill grounds bought from A. Finkl & Sons, the proposal would rise in close proximity to the nine-story 2100 N Southport Avenue, which is poised to become Chicago’s tallest mass timber building at 119 feet. As noted in a Chicago Business article this week, apartments are the most reliable and pragmatic real estate market in the city right now, buoyed by the ever-increasing number of remote and hybrid work schedules. As such, the demand for this type of commercial real estate is dramatically outpacing office, condo, and hotel construction. Given that Lincoln Yards itself will be heavily mixed-use, the idea of peripheral apartment initiatives is the most logical for addressing supply and demand.

The heavily transit-oriented project will be oriented towards several different transit options, including bus service for Route 73, the Metra’s Clybourn Station to the west, and the Brown and Purple Lines at Armitage station to the east.