The Community Development Commission has approved the land sale for the upcoming mixed-use development located at 9200 S Burley Avenue in South Chicago. The project was planned by Interfaith Housing Development Corporation and Claretian Associates. The site itself sits at the southwest corner of E 92nd Street and S Burley Avenue.

Landon Bone Baker Architects is serving as the architect for the 80-foot-tall, five-story mixed-use building. The development will offer 81 affordable housing units and will be split up into 15 total studios, 11 one-bedrooms, 21 two-bedrooms, 25 three-bedrooms, and nine four-bedroom apartments. Seventeen of the units will be targeted at 30 percent AMI, 48 will be priced at 50 percent AMI, and the remaining 16 will be marketed at 60 percent AMI.

As previously reported, retail space is planned for the ground floor. The 6,500-square-foot commercial space could potentially hold a grocery store fronting E 92nd Street. There will be residential units occupying the south wing of the ground floor, and the residential entry will be marked by a small canopy and a large mural on the facade. The southernmost end of the site will feature a parking lot with 44 spaces, a communal patio, a playground, and a multi-sport court located behind the building. There will be 54 bike parking spaces incorporated throughout the property site.

The project has estimated costs of $40 million, and developers will seek funding from multiple avenues. The developers are currently seeking $5 million in TIF funding, $5 million from DOH soft funds, $1.9 million at four percent LIHTC, as well as a write down of land parcels to $1 per lot. The developers plan to acquire the additional funds through with state programs, mortgage financing, and an assortment of other grants. 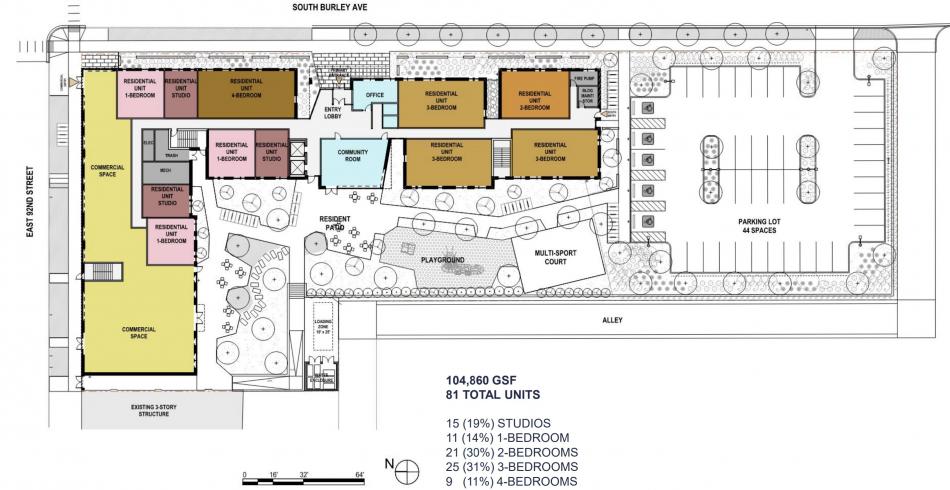 Though the Chicago City Council has already approved the plan, they will need to review the development’s budgetary needs before issuing final approvals. There is still no update on a presumed timeline for the project.