A new temporary community plaza is coming to Chatham. As reported by Block Club Chicago, the neighborhood addition could be completed as soon as summer 2022. The site which will span 8,500 square feet is to be located at the corner of E 79th Street and State Street and will honor legendary Gospel singer Mahalia Jackson who was a longtime Chatham resident. Mahalia Jackson is remembered as a vibrant pillar of the community and as one of the most influential figures in Gospel music.

The plaza is planned as a celebration of the arts within the community and the start of a much larger community project known as Gateway 79. Gateway 79 is currently securing more funding and is launching The Mahalia Jackson Court in the interim to provide the community with a celebratory and creative space. 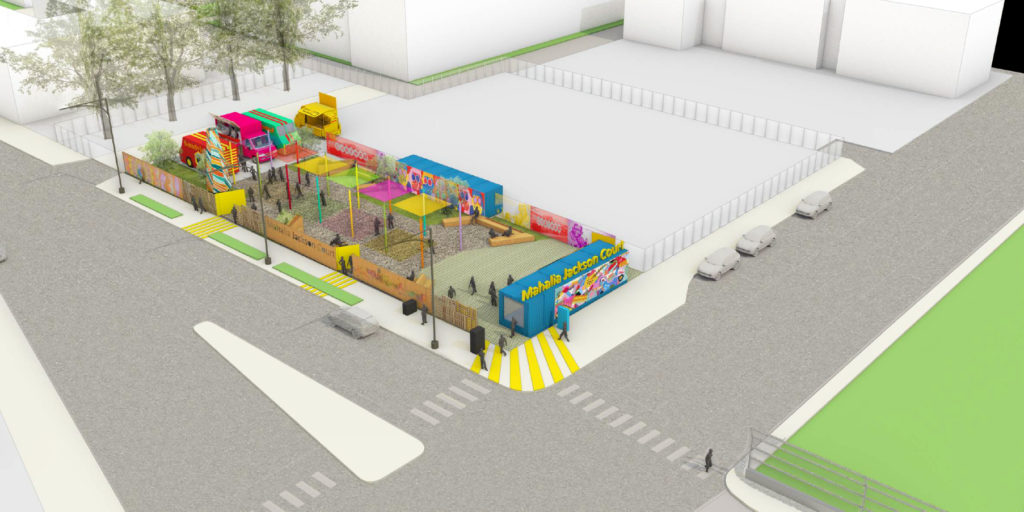 A mural dedicated to Jackson has been commissioned by local artist Dorian Sylvain. This piece will act as an anchor to the creative direction of the community space. Krueck Sexton Partners have signed on as the architects for this project.

The future plaza is perfectly situated for commuters in the neighborhood as it is steps away from both the CTA L Red Line at the 79th Street station and the Route 79 bus. Mahalia Jackson Plaza will be a place for Chatham families and community members to gather while awaiting or departing transportation. The project indicates there will be a play area, a cafe, and space for food trucks and other pop-up vendors on site.

So far the project, which is run in tandem by The Greater Chatham Initiative and the Carter Temple CME Church, has received $500,000 from the city’s Department of Planning and Development. The plaza was made possible through the city-led Public Outdoor Plaza program, an initiative that transforms vacant lots into public spaces for community members.