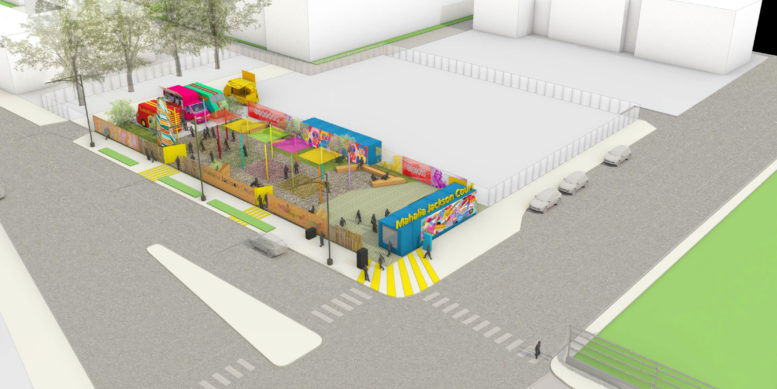 The Department of Planning and Development has launched a new community-centered program designed to help make use of underutilized spaces in residential and retail corridors. The program is called the Public Outdoor Plaza or POP! program and includes the Mahalia Jackson Plaza which YIMBY previously reported on earlier this month.

According to the Department of Planning and Development (DPD), the program is seeking proposals to support the creation of these strategically placed community gathering spaces which will serve as local hubs for residents, shoppers, commuters, and neighborhood visitors alike. The proposals which are chosen will be eligible for up to $500,000 in city funding for construction, design, and continued maintenance costs. The parameters for proposed plaza locations are broad and state that lots may be publicly or privately owned but must be located within moderate- or low-income areas of the city. Improvements to existing plazas are also eligible for consideration.

This POP! initiative, under the direction of DPD commissioner Maurice Cox through mayor Lori E. Lightfoot’s commitment to neighborhood reinvestment, will itself provide funding for approximately 10 of the 15. A pilot effort launched in 2020 resulted in the creation of the POPCourts! community gathering space at Chicago and Lockwood Avenues in Austin in 2021.

First- and second-round requests for proposals for new plazas were issued and were all submitted by the deadline of Friday, April 8. No information is available at this time as to the potential approval dates for these proposals. As stated on the DPD site the POP! program is part of the Chicago Recovery Plan’s $1.2 billion strategy for equitable economic recovery and support for thriving and safe communities.