The Chicago City Council has approved the Regal Mile Studios development located at 7700 S Stony Island Avenue in South Shore. The large triangular site is bound by S Stony Island Avenue to the east, E 77th Street to the north, and S Chicago Avenue to the southwest. Formerly the home of a Kmart, the almost seven-acre parcel now sits vacant. Regal Mile Ventures LLC is the developer behind the project, composed of Loop Capital and Derek Dudley, a producer of Showtime’s The Chi series. 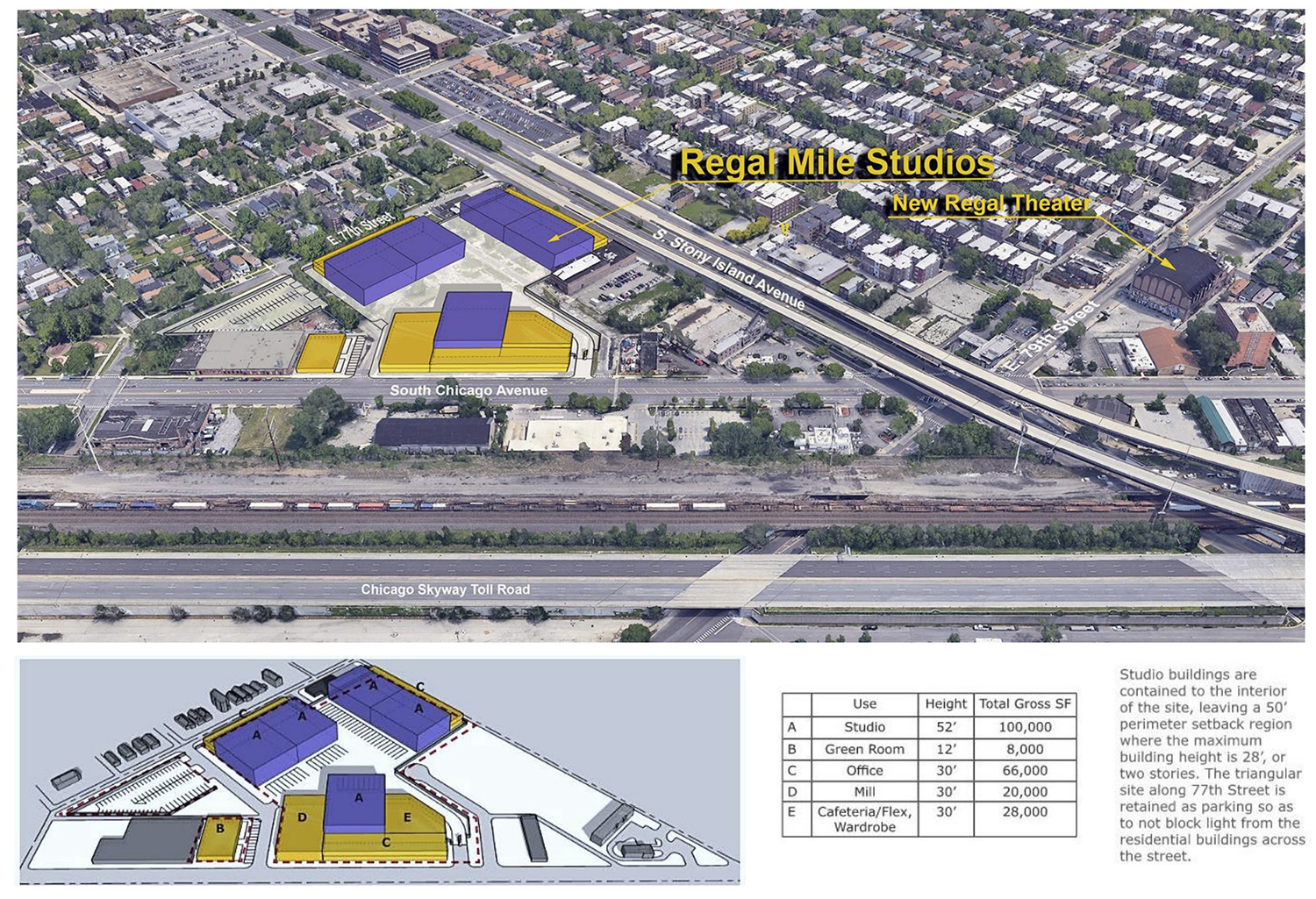 Designed by Bauer Latoza Studio, the development will include three film studios, office space, staging areas, and 95 parking spaces. The triangular site will be composed of three areas. The first is the main studio parcel, holding three studios and office structures. Two other smaller parcels include the northwest parking lot and a smaller parcel south of the parking lot that will have a green room, which is a prep area for actors. 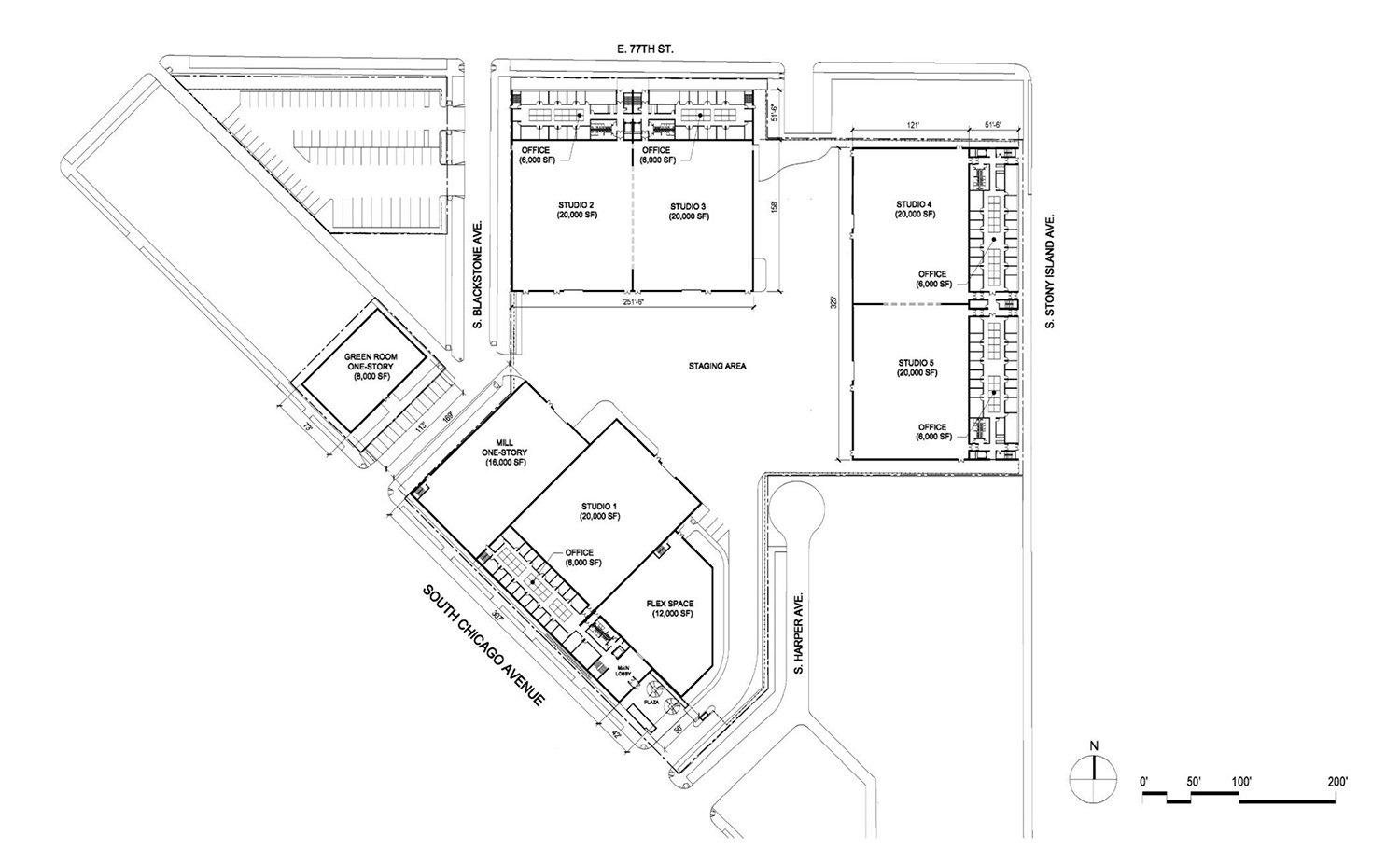 The main site is organized around a central internal portion that acts as open flex space, offering an internal outdoor yard for staging and access for staff. Placed around this central area, the three studio buildings each measure 20,000 square feet with 40 feet of interior clear height space for filming and set building. Located out from the studio structures are attached office spaces. Rising 28 feet, the two-story portions will face the street, blocking views of the taller 52-feet-tall studio enclosures. The office portions are faced with lively facades that face the neighborhood.

All three elevations facing the surrounding streets will be treated with the same architectural expression. The facade is a vibrant pattern of form and color that takes cues from street art and filmstrips. The resulting vibrant linear design is present on all three frontages using metal paneling as the material.

The site’s main entry point is off of S Chicago Avenue which will handle all vehicle access, A small entry plaza flanks the vehicle entrance, located in front of the office building lobby. A tall feature obelisk flanks the entry plaza and gate, displaying the studio name. 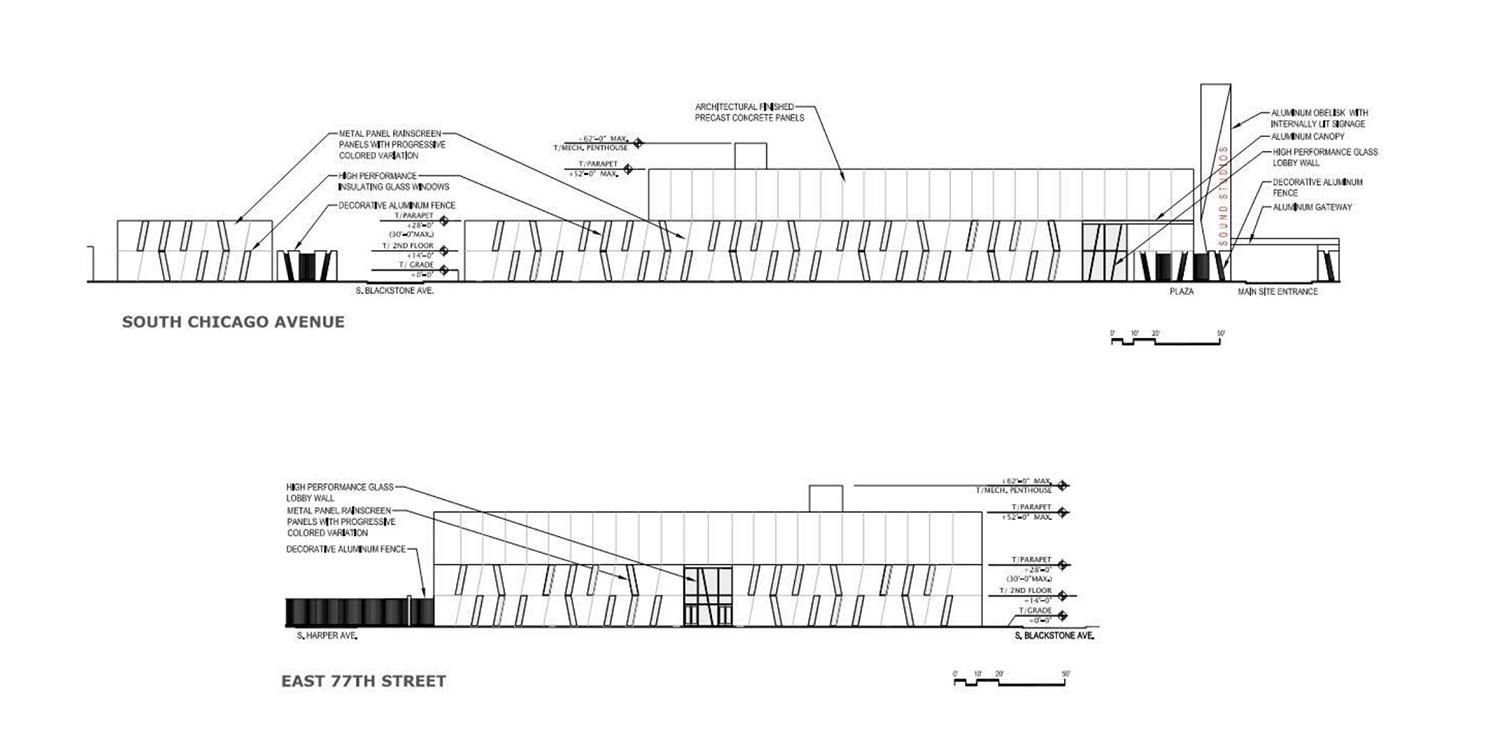 The site consists of multiple parcels, including city-owned lots. The Community Development Commission approved the sale of those lots recently in July, with a final approval pending from the Chicago City Council. The site will be rezoned from C2-2, M1-2, and RS-3 to an overall C2-2, with a final designation of a Planned Development. The Chicago Plan Commission, zoning committee, and Chicago City Council have approved of the rezoning and overall project. The $60 million plan is expected to be completed in late 2022 or early 2023.