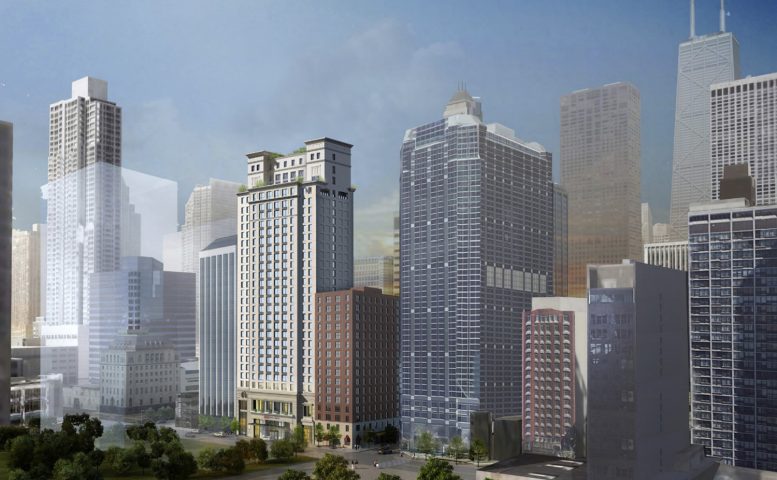 Renderings have been revealed for the proposed RIU Plaza Hotel Chicago at 150 E Ontario Street in Streeterville. Vacant for more than ten years, the project site is an infill site off of N Michigan Avenue. The midblock location is bound by two adjacent buildings spanning the block between N Michigan Avenue and N St. Clair Street. The Prime Group is the developer behind the proposal. 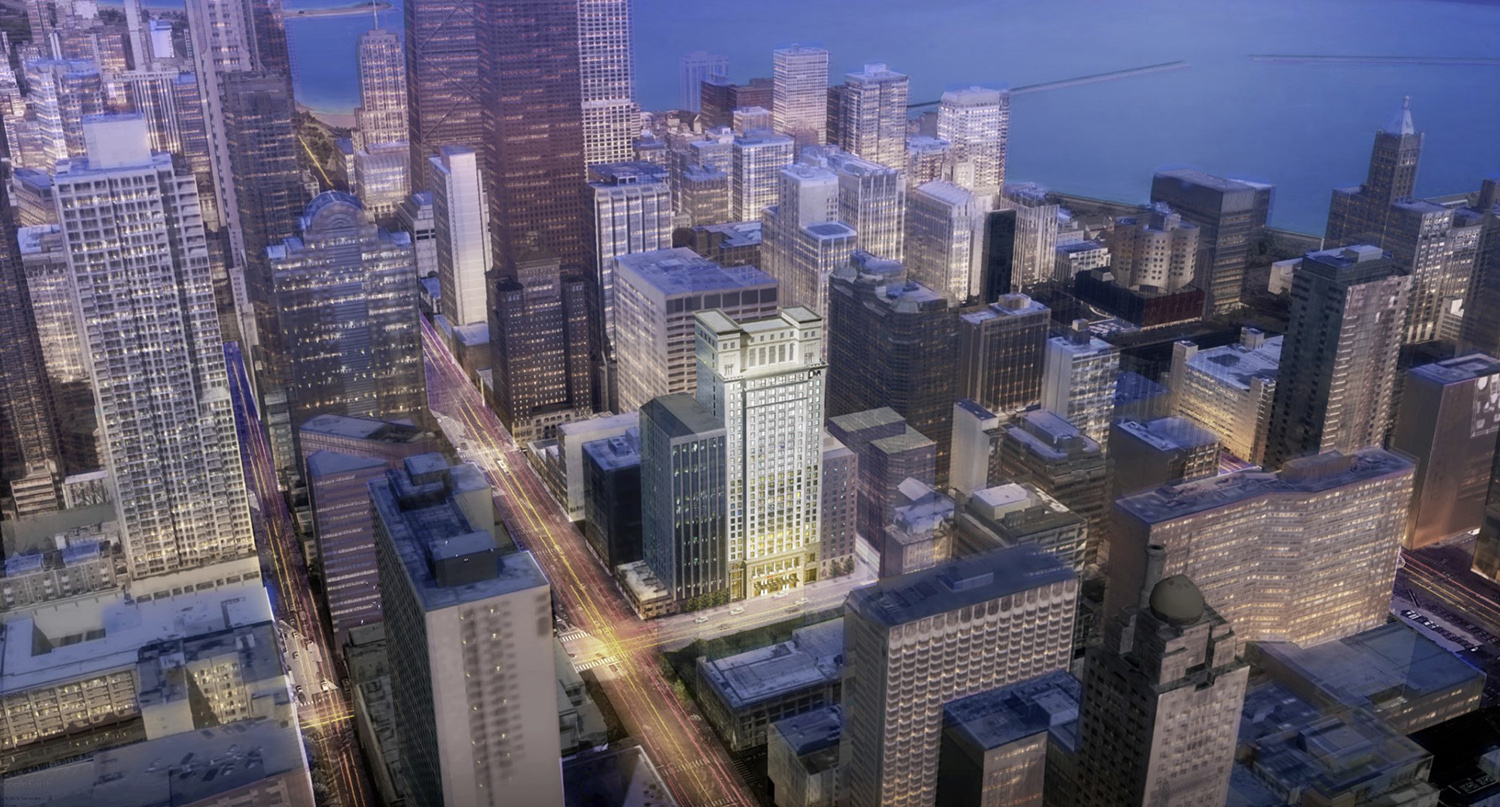 Designed by Lucien LaGrange Studio, the new construction will be a 28-story hotel tower for Spanish hotel chain RIU Hotels and Resorts. Rising 345 feet, the building will exclusively hold 388 hotel rooms. The base of the tower will span two floors with 23 floors of guest rooms above, topped by mechanical space. No parking will be provided as part of the project. 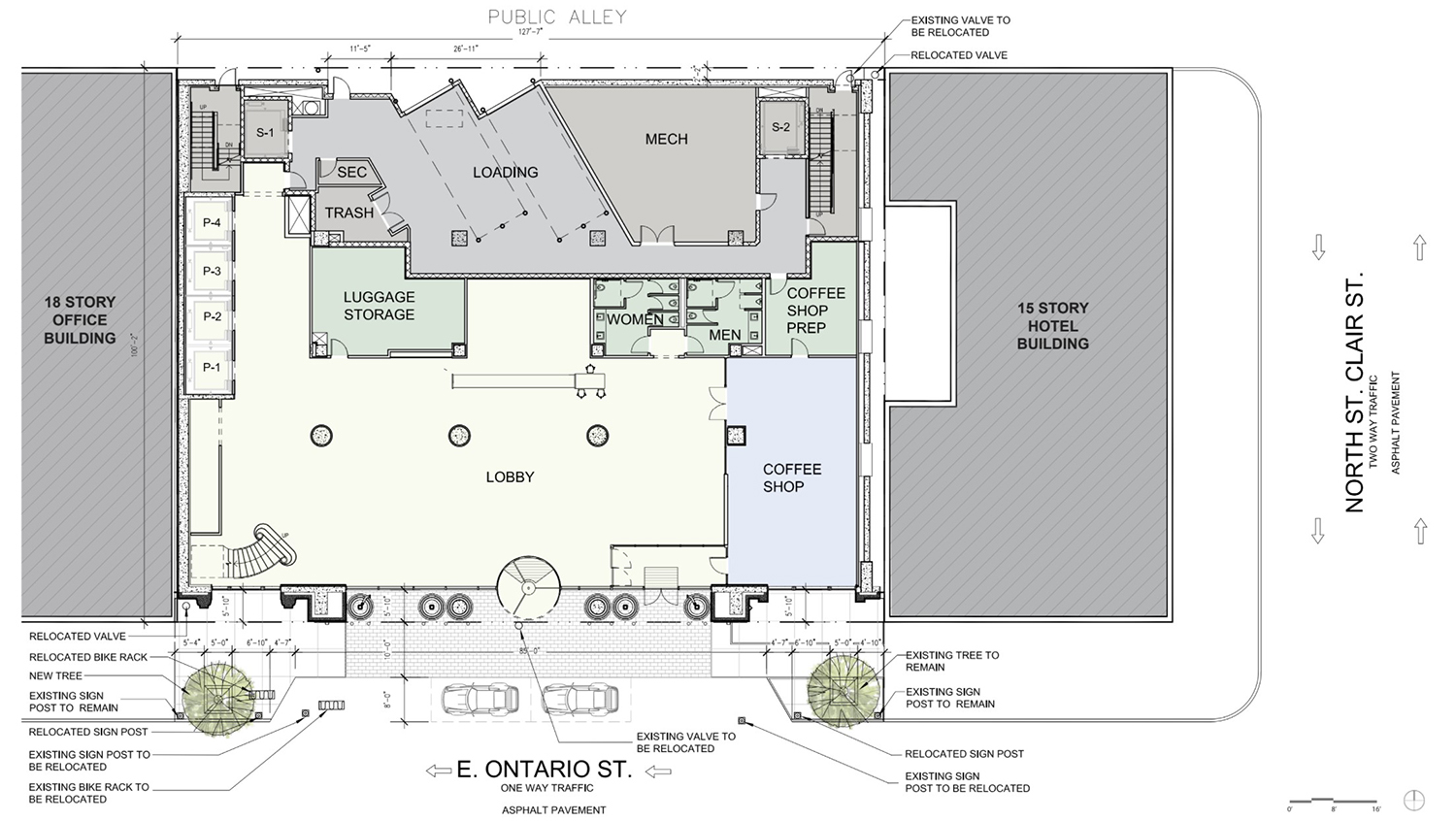 Infilling a void in the street wall, the new structure will enhance the pedestrian experience while creating a sense of arrival at the lobby. The massing strategy breaks down the bulk of the building to contrast the boxy buildings in the surrounding context. The tower portion features setbacks on the sides of the front elevation to break the front wall into three portions. The crown of the structure consists of mechanical spaces that are screened in a similar facade treatment. 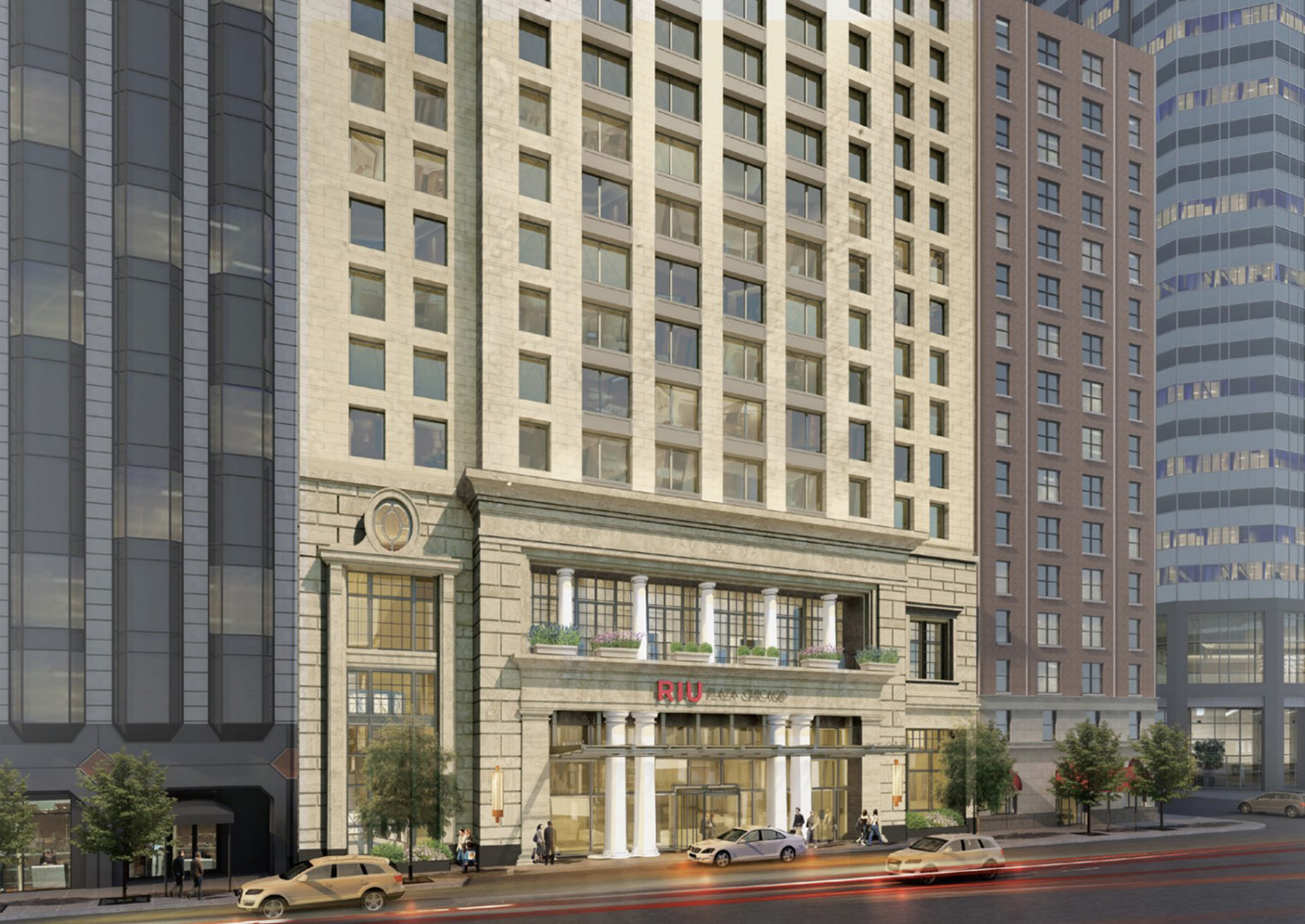 Built up against the property lines and adjacent structures, the design will feature an articulated facade that introduces windows for the public corridors above the roofline of neighboring towers. An articulated relief pattern in the walls will add texture to the east and west elevations. 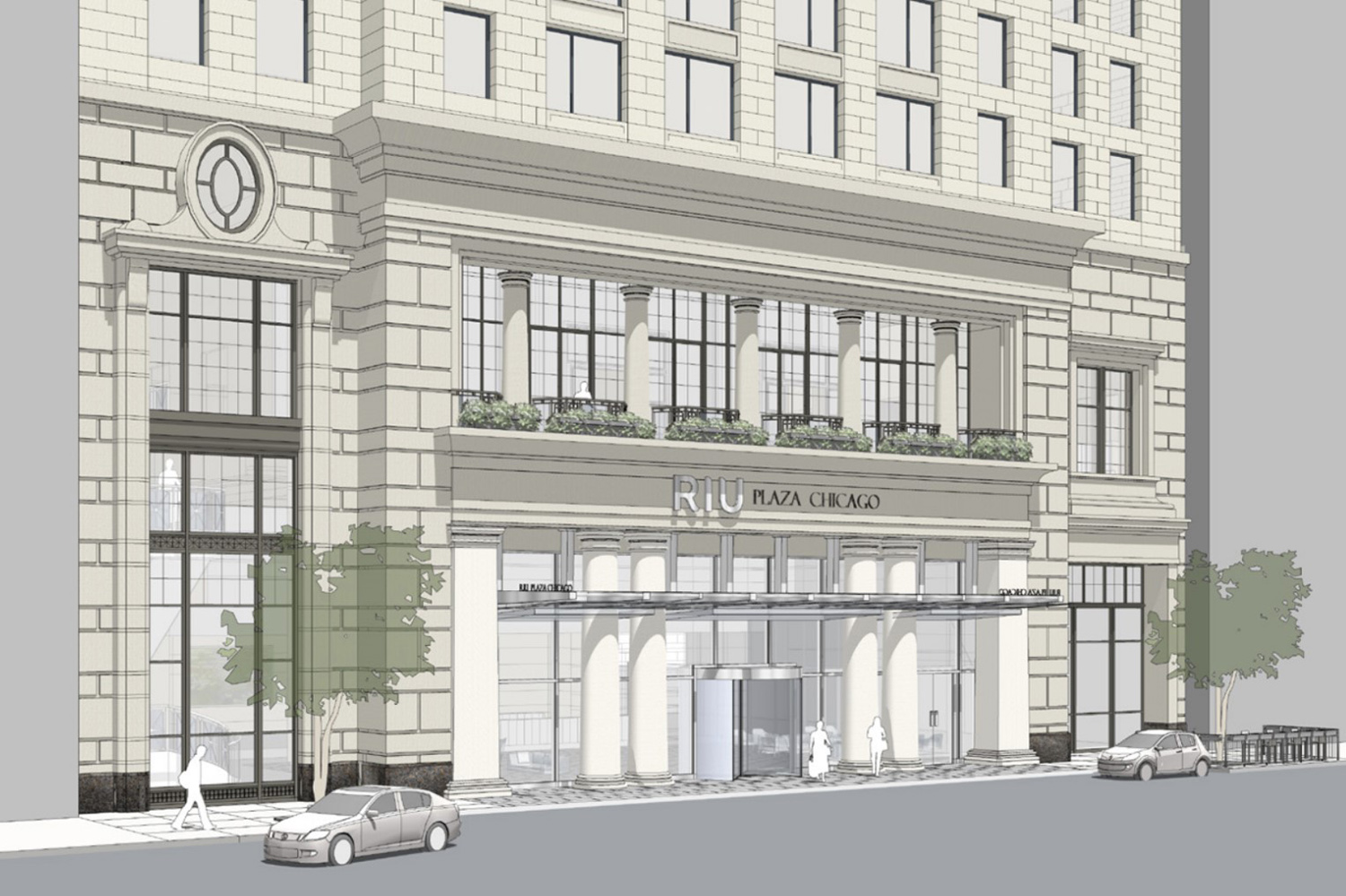 The entry facade is ceremonial and welcoming, creating a large opening with a high level of transparency. A complex structural transfer will be used to open up the base. The ground floor will have higher ceiling spans, with the main lobby in the center flanked by two columns on each side of the exterior elevation. A glass and metal canopy will extend over the sidewalk. The east side of the ground floor will host a coffee shop. 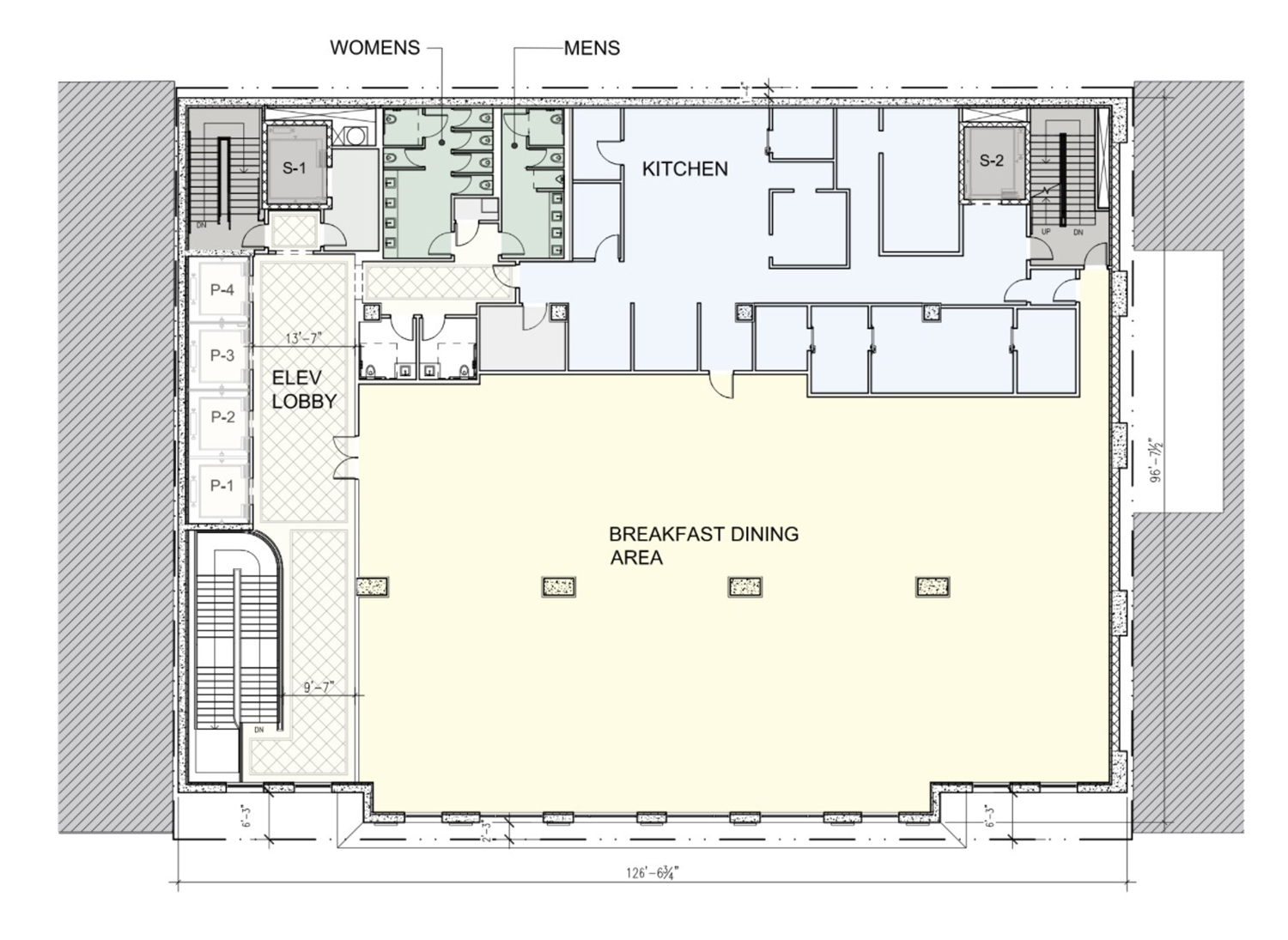 The second floor is a breakfast dining room for guests, with the floor being set back behind the colonnade expressions on the exterior. The west side of the front face will have a two-story bay window topped by an oculus bay window. An ornamental stair connecting the lobby and dining room will be behind this window. 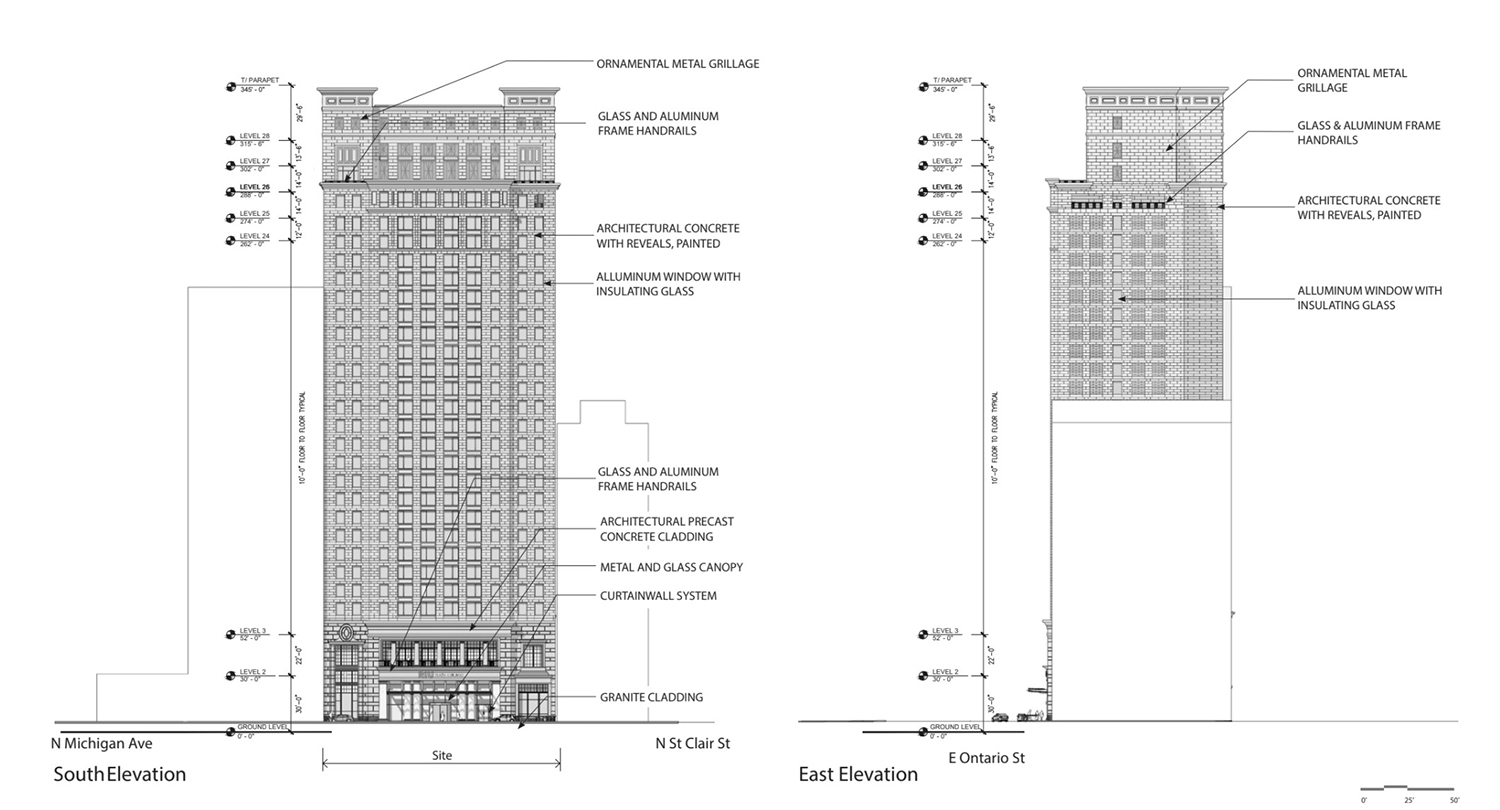 The upper portion of the tower will use architectural concrete panels to mimic stone, with the base using precast concrete with a larger reveal expression to also mimic stone. The base of the tower will meet the ground with a dark granite material. Planters will be placed in front of the storefronts. Typical guest room floors will include 17 rooms oriented along a halfway running east to west. 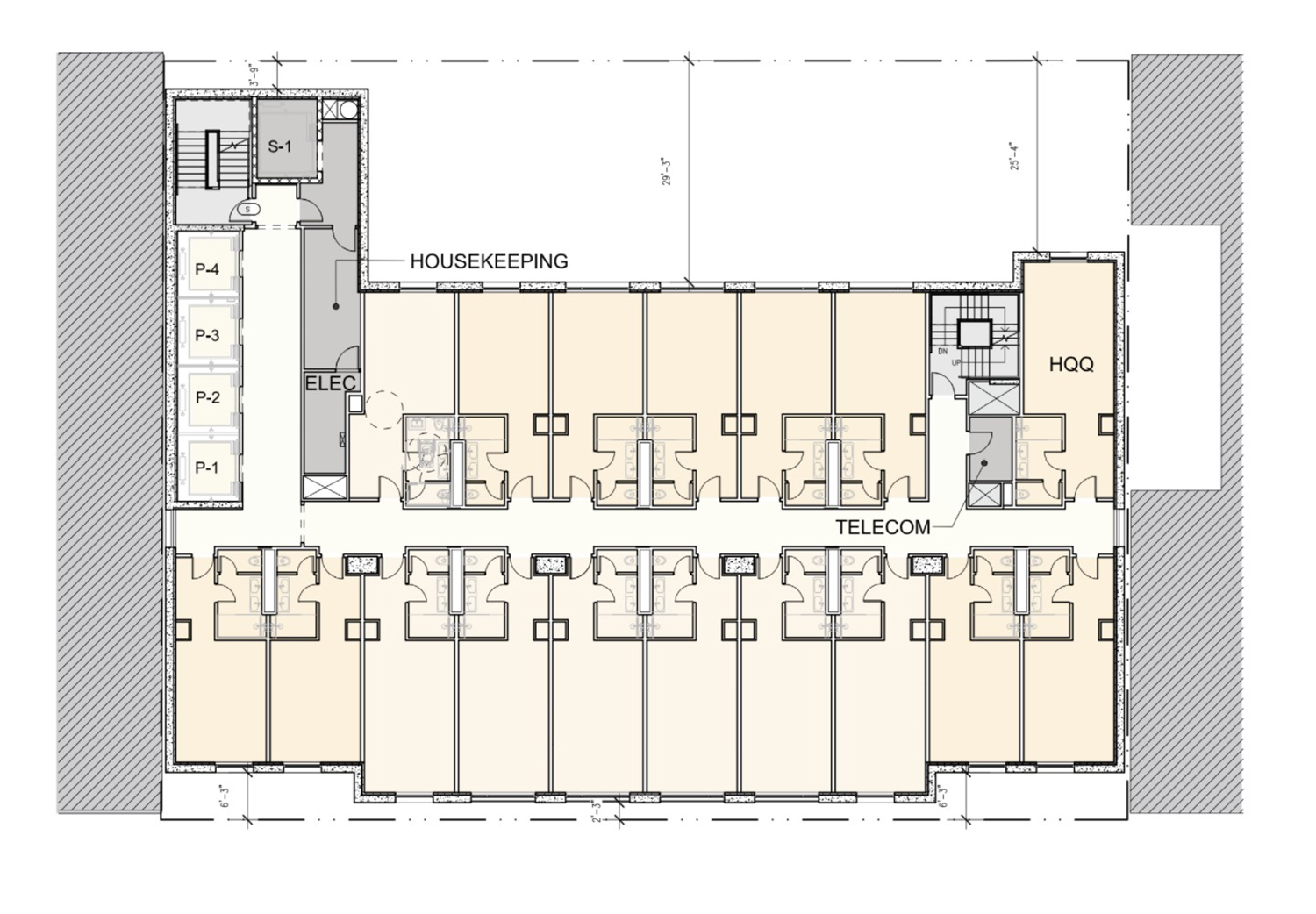 Changes made to the project includes the reduction in height from 401 feet to 345 feet. The amount of hotel rooms has been reduced from 458 to 388. The original plan included a ballroom, which has been removed. A full-service restaurant was also eliminated from the scope of the plan. A porte cochere along E Ontario Street has also been removed. 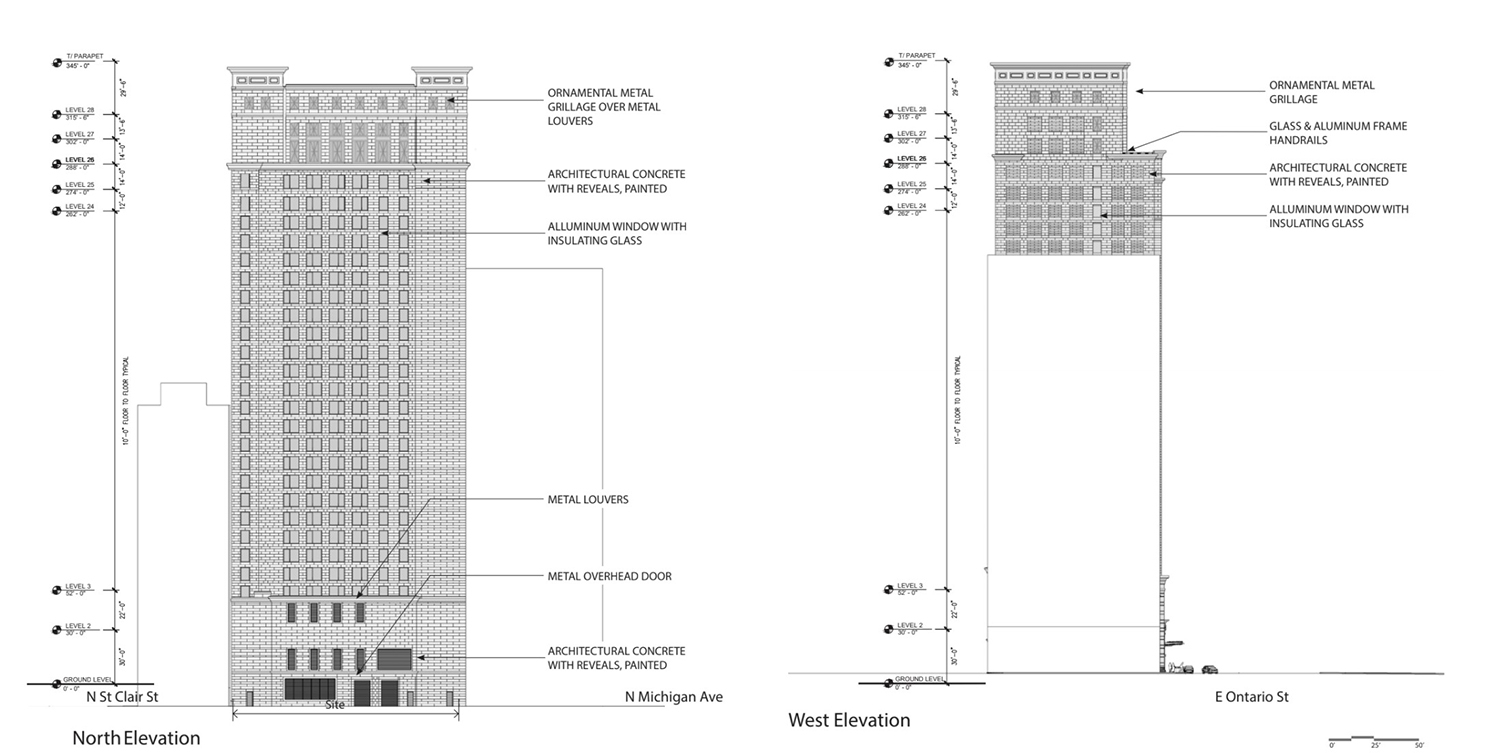 The development will require a Planned Development designation because of the FAR bonus requested. The developers will pay almost $3 million to the Neighborhood Opportunity Fund to receive a bonus of 6.4, for a total of 18.4 FAR. Zoned as DX-12, the site will not be rezoned for the project and no public funding will be requested. The development team is seeking to go in front of the Chicago Plan Commission as early as May of this year, with a goal of breaking ground by the end of summer 2021. With a 22-23 month construction schedule, completion is projected for summer 2023.