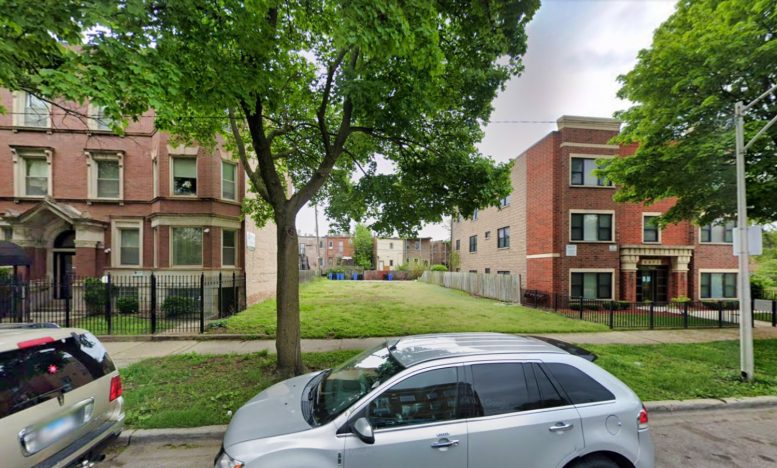 Permits have been issued for a three-story residential building at 6447 S Ellis Avenue, located in Woodlawn. Owned by Mike Slazas, the planned project will contain four total units, along with a basement and a rear three-story open porch. The new structure is set to replace a currently vacant lot. However, given the larger size of the parcel and its current address of 6445 S Ellis Avenue, it is unclear if the owner will ultimately fit two new buildings within its bounds.

Prashanth Mahakali of PMPC Architects is listed as the architect of record. While no renderings or drawings have been published, the issued permit’s filing description has indicated that the design will be frame.

As far as transportation, four on-site parking spaces will be included, with various public transit options in the area. For bus access, residents will find east and westbound stops for Route 63 along 63rd Street, a five-minute walk north. Additional buses can be found within a 10-minute walk, including Route 4 to the west and Routes 5, 67, and 95 to the south. Those wishing to board the CTA L’s Green Line will find Cottage Grove station a nine-minute walk northwest.

Several parks are situated in the vicinity, including Mamie Till-Mobley Park via a minute walk north. Larger parks like Washington Park and Jackson Park are also within a 20-minute walk to the northwest and east, respectively.

Renaissance Properties-IL, LLC is the general contractor for the $300,000 development. A full completion timeline is currently unknown.