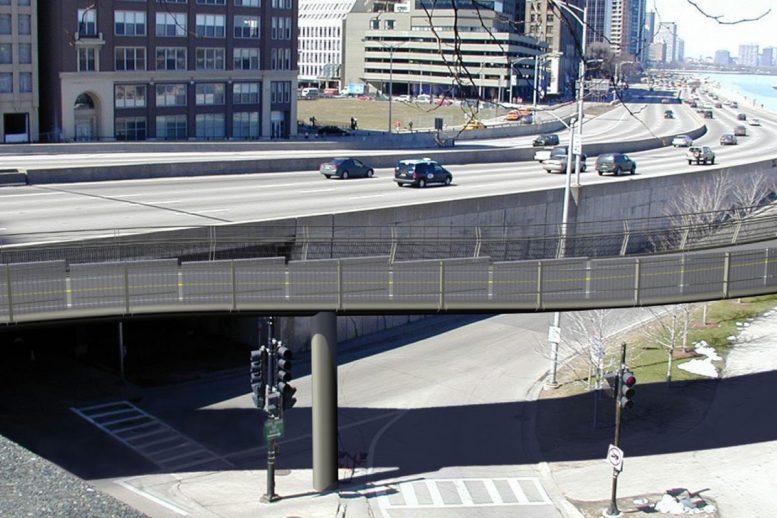 Recent photos show construction nearing completion for the final section of the Navy Pier Flyover, an above-grade portion of the Lakefront Trail that stretches close to third of a mile in length. Due to its staggered development timeline, the project currently serves cyclists and pedestrians via its completed first two phases, while the third phase alongside Outer Drive Bridge is still under construction. 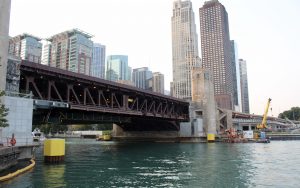 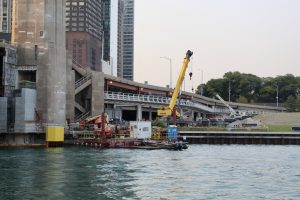 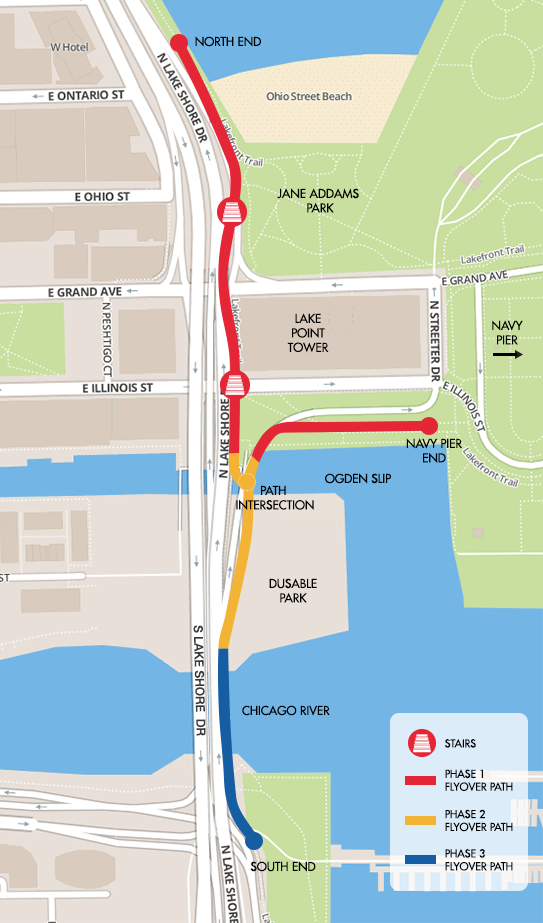 The nearly 1,750-foot stretch of trail spans from the southern bank of the Chicago River to E Ohio Street and Ohio Street Beach. From its northern end, pedestrians and cyclists can access nearby bus routes 2, 29, 65, 66, 124 via a two-minute walk southeast to the Grand & Streeter stop.

For rail transit, CTA L access includes a 20-minute walk west from the southern end to the Red Line’s Lake station, as well as a 19-minute walk west from the trail section’s northern end to the Red Line’s Grand station. An additional nearby point of interest include the namesake Navy Pier less than a two-minute walking distance from the elevated ramp that extends east from the Flyover. Several parks are also in the vicinity, including four-acre Jane Addams Memorial park, 13-acre Polk Bros Park, 10-acre Milton Lee Olive Park, and the currently in-development DuSable Park.

The Flyover is a public infrastructure project developed by the City of Chicago’s Department of Transportation. HNTB is serving as the project’s architect. As far as construction, the project website lists FH Paschen as the general contractor for the first phase, while Kenny Construction is the general contractor for the second and third phase. T.Y.Lin is serving as the construction manager.

According to their website, HNTB’s uses a biomimicry-type design for the raised skyway, consisting of a single steel “spine” with attached “ribs” to support the 16-foot-wide path above. This structural system allows for three degrees of freedom for the path to turn and change elevation as it spans through an irregular terrain. Additional features of the skyway include stainless steel railings and an LED system to illuminate the path and structure at night. 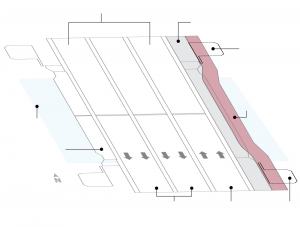 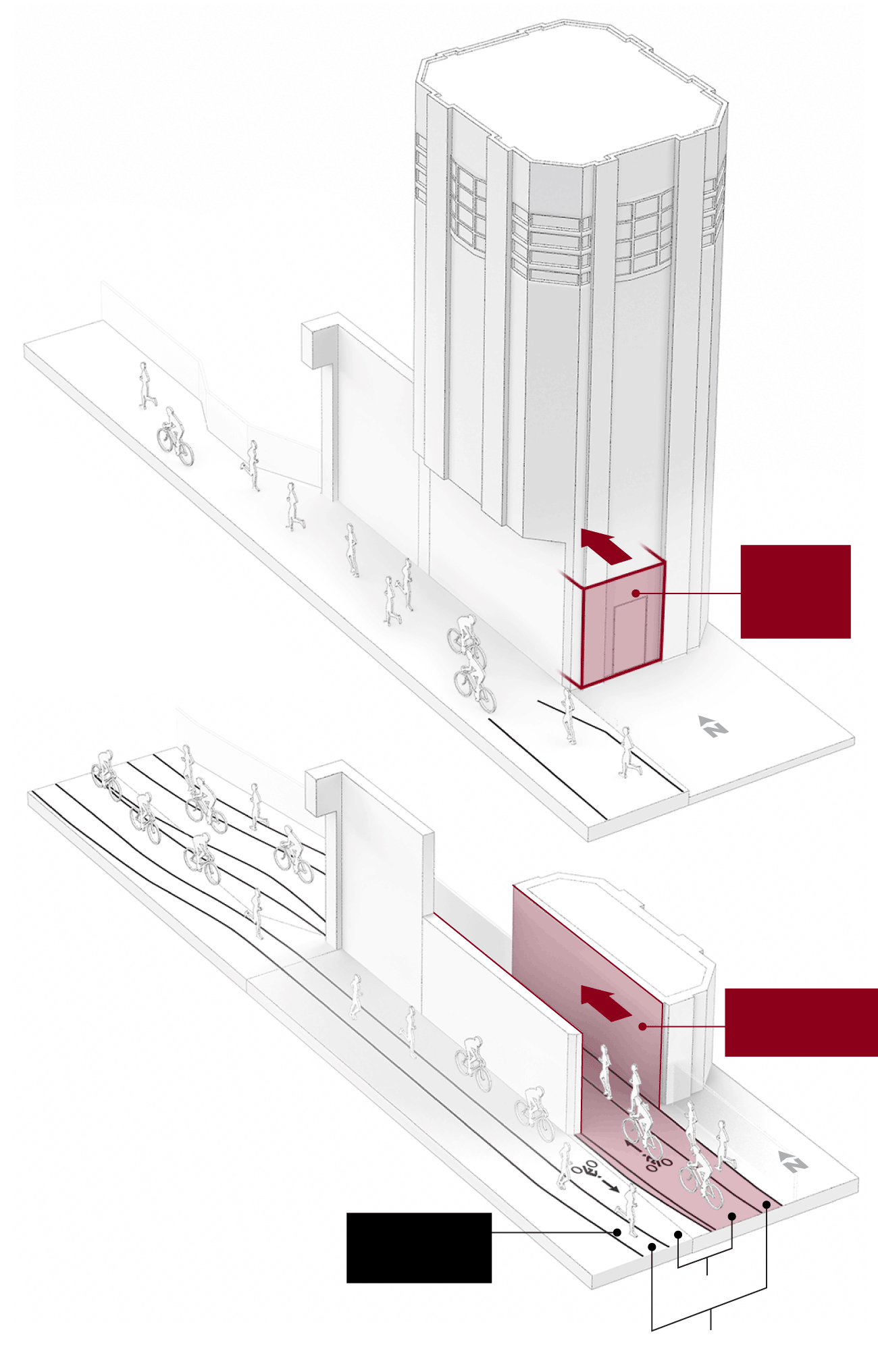 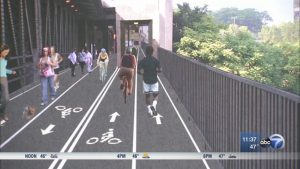 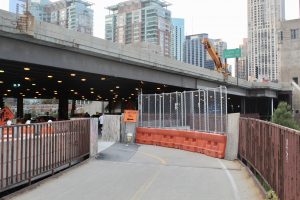 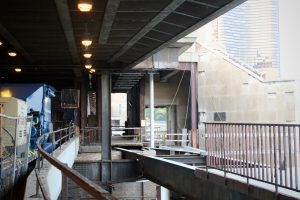 One of the most distinct components of the design is the currently-in-progress bridge, where construction is required to tunnel through the northeast and northwest solid-limestone towers that anchor the original bridge. In between the two towers, the Flyover will attach to the Outer Drive drawbridge structure while hovering above the water. In addition to equipment on-site, updated photos show both the tunnels and cantilevered portion of the walkway near completion, with primarily final accessory elements and finishes still required.

The project, having broke ground in 2014, was originally projected to cost $64 million and open fully in 2018, as reported by the Chicago Tribune. However, with delays caused by increased costs due to the bridge restoration, as well as funding difficulties, the final tallied cost has yet to be disclosed. An interim pedestrian and bicycle route has been carved out of one of the bridge’s vehicular lanes. An official opening of the final phase is expected by the end of this year.