Photos from this past week show facade work progressing rapidly at the Illinois Medical Districts’ 1926 W Harrison Street. Naperville-based Marquette Companies has planned a re-skin and other renovations of the 18-story Medical Center Apartments building, originally built in 1964. 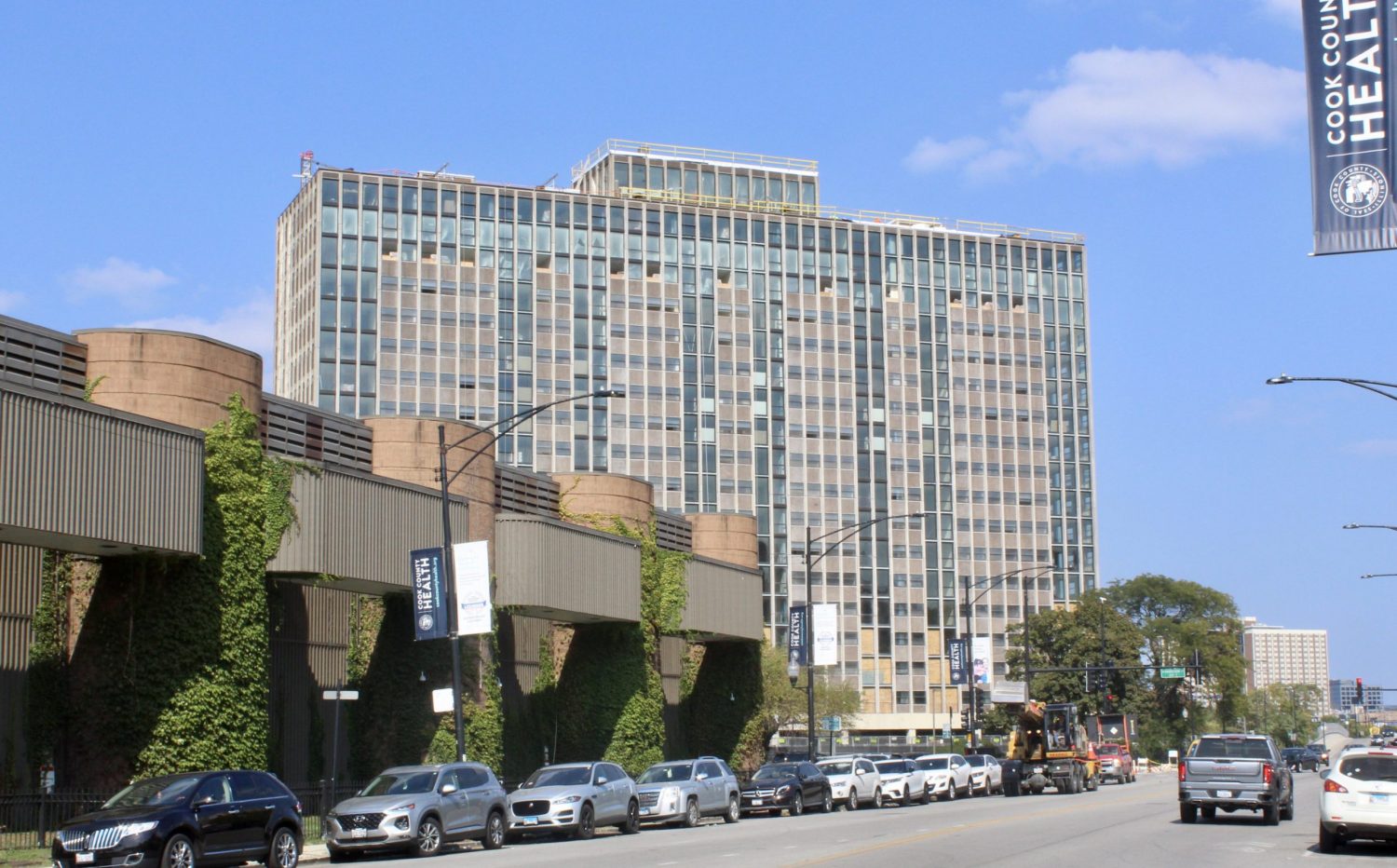 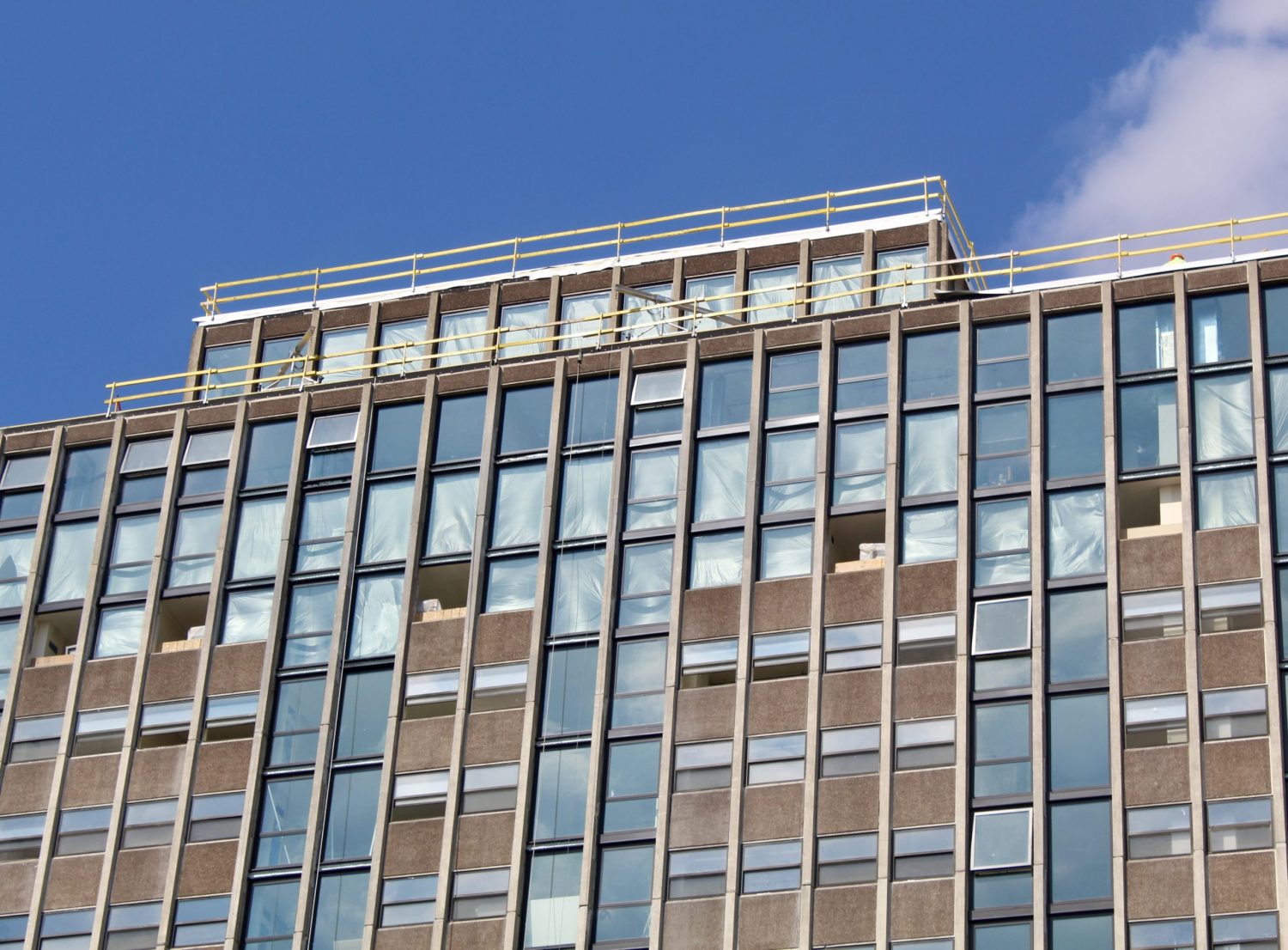 Now known as Atrio, the residential building will be undergoing both interior and exterior renovations, according to a permit issued in April. The permit also indicates that no large-scale changes will be made to the overall programming. Crain’s reported in May of 2019 that the former owner CBRE was looking to sell the property, which contained 306 units. No details have been made available on whether that figure will be retained.

David Brininstool of Brininstool + Lynch is listed as the architect of record, according to the same April permit. The design will retain the essential features of the original mid-century design, while modernizing the facade’s materials and treatment. Added elements include a more open entry with more windows, as well as a crowning element to the smaller final floor, creating a cupola-like structure.

The renovated tower will provide living options near multiple medical campuses, the closest of which is the adjacent John H. Stroger, Jr. Hospital of Cook County. Also within a ten-minute walking distance are Rush Medical Center, the University of Illinois’ medical campus, and the Jesse Brown VA Medical Center.

As far as transit, the closest bus stop can be found at the adjacent Harrison & Ogden intersection, serviced by Routes 7 and 126. Route 50 can also be found at Damen & Harrison, just one block west. CTA L access includes a three-minute walk north to the Blue Line’s Illinois Medical District station, running alongside Interstate 290. Meanwhile the Pink Line’s Polk station can be accessed via a 10-minute walk southeast. 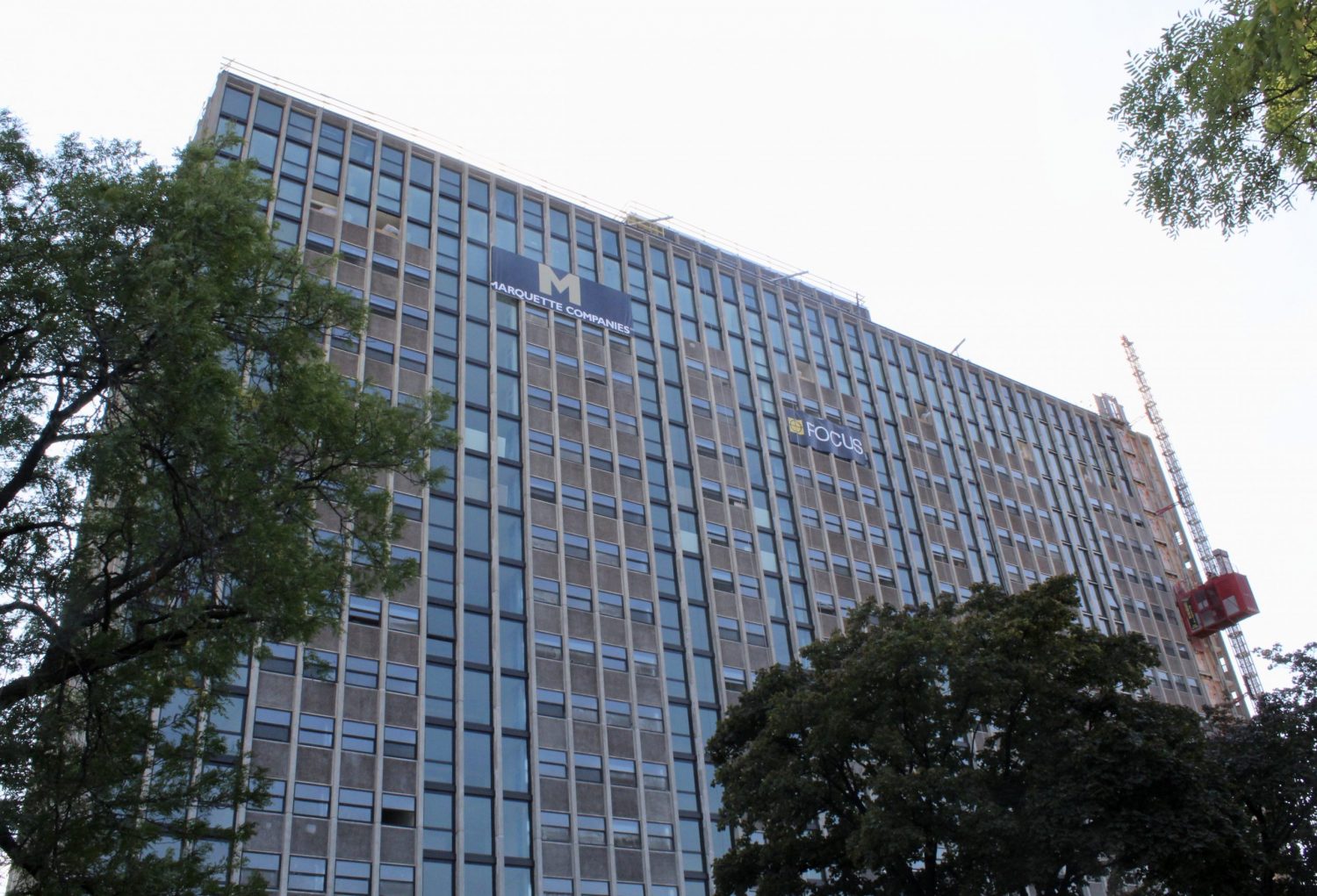 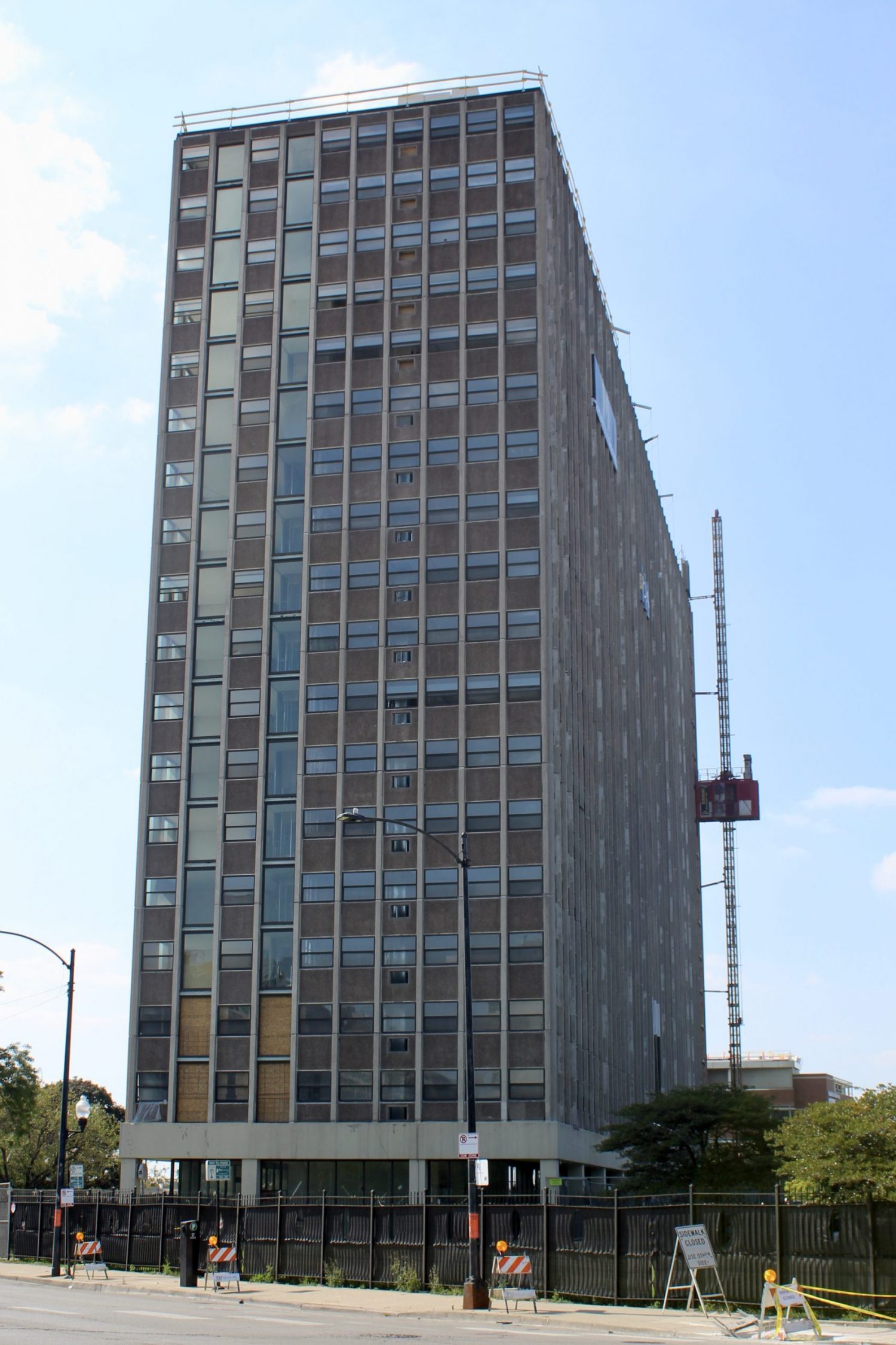 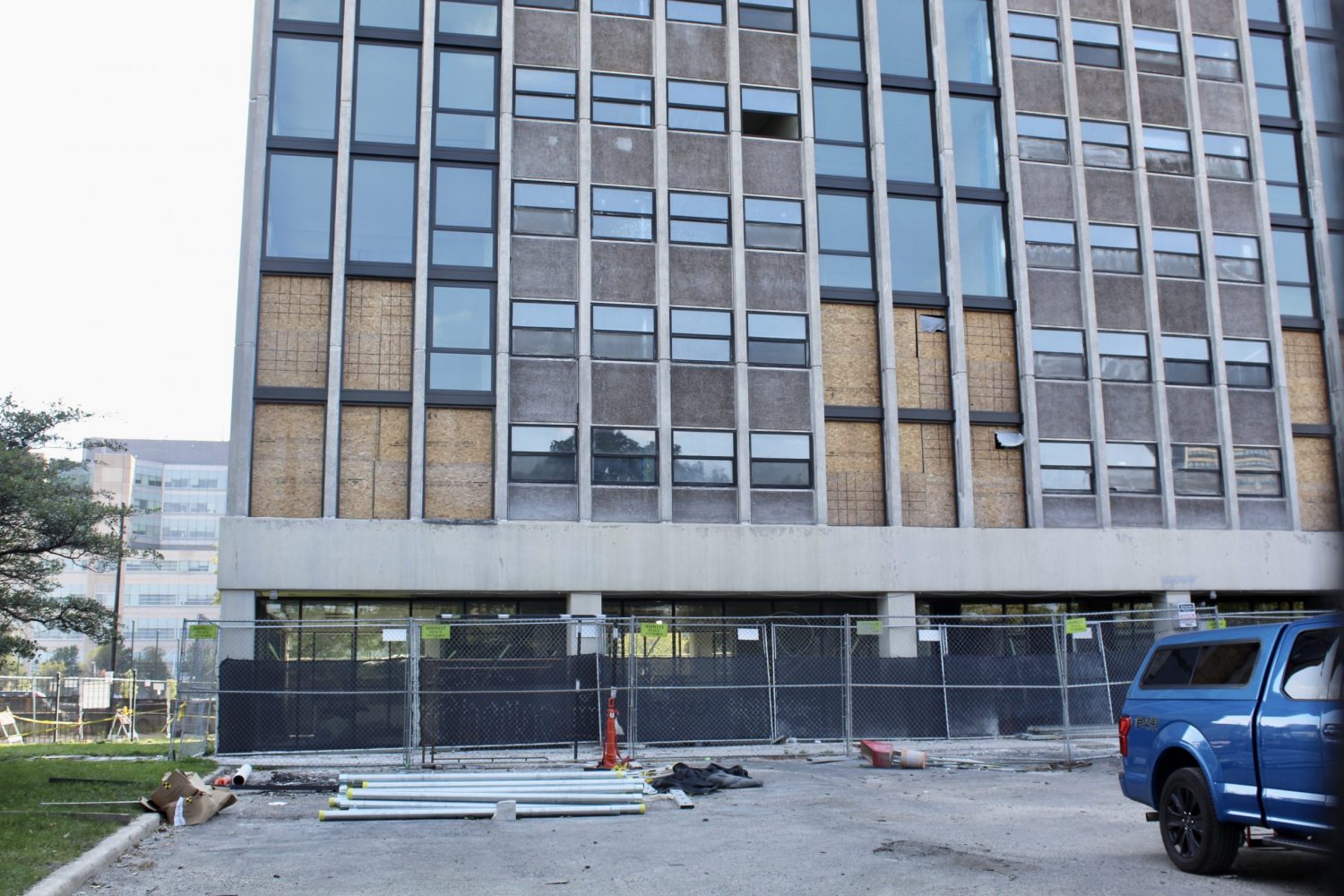 Construction photos reveal the progression as the exterior windows and other pieces are swapped out. Focus Construction is serving as the general contractor for the $45 million project, according to permits. 1926 W Harrison Street is expected to be completed by March 2021.