Today, YIMBY shows the evolution of Chicago’s skyline through an unlikely pairing: Ferris Bueller and Google Earth. We have three shots from Paramount Picture’s iconic 1986 coming-of-age film “Ferris Bueller’s Day Off”, which we then compare to photos of the city from the same angle today. 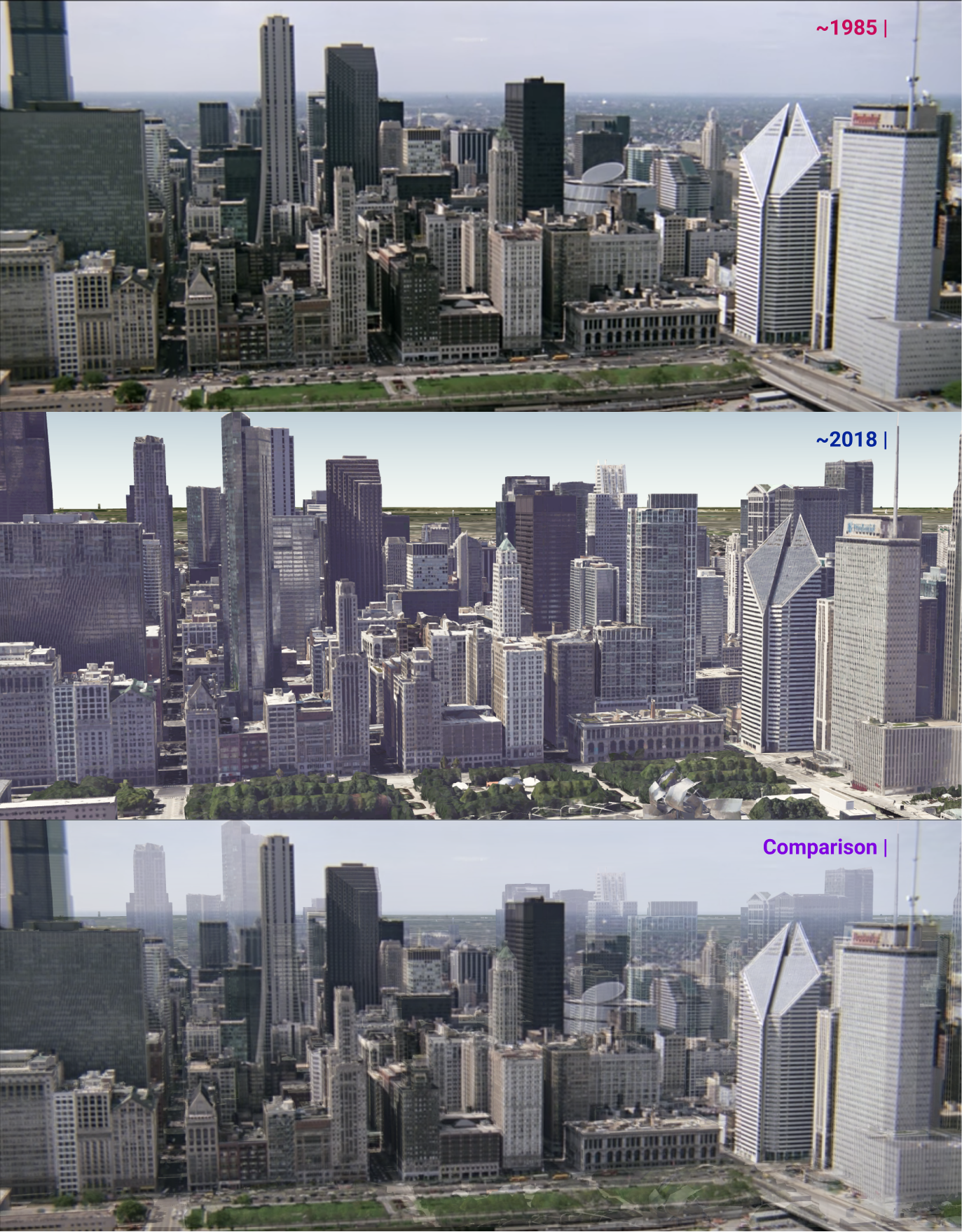 The first shot comes from the iconic scene where Ferris, Sloan, and Cameron manage to escape their suburban high school and draconian principle, then head off to downtown. To the tune of The Flower Pot Men’s “Beat City,” a series of aerial shots are shown in the following cut scene. One particular shot is of Michigan Avenue and what is today Millennium Park, which in the film won’t be completed for another 19 years. The section of the loop shown behind Michigan Avenue lacks much of today’s density, as towers like 1,007-foot-tall The Franklin Center built in 1989, and 822-foot-tall The Legacy at Millennium Park built in 2009 had yet to be developed. There is also a clear view of the then-brand-new Thompson Center, which has since been obscured by newer developments from this orientation. 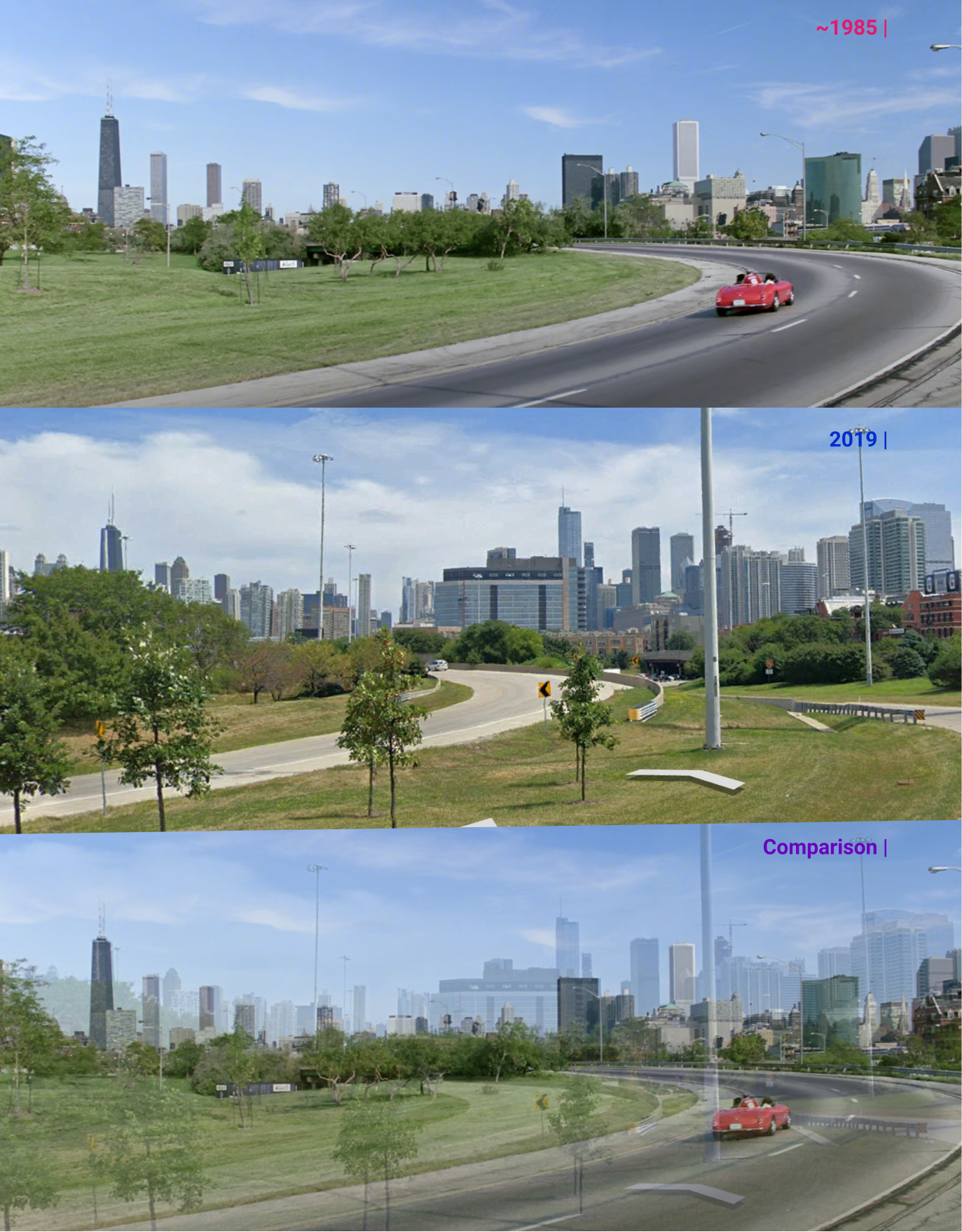 Another image shows Ferris Bueller and his group speed towards downtown in Cameron’s father’s prized car. This scene, shot from an interchange along the Kennedy Expressway in West Town, exemplifies just how much construction has taken place just north of the river, something that will not be as obvious until compared side-by-side. The Aon Center, built in 1973, is visible in both, but Trump International Hotel & Tower and 300 N LaSalle to the right were both built in 2009. 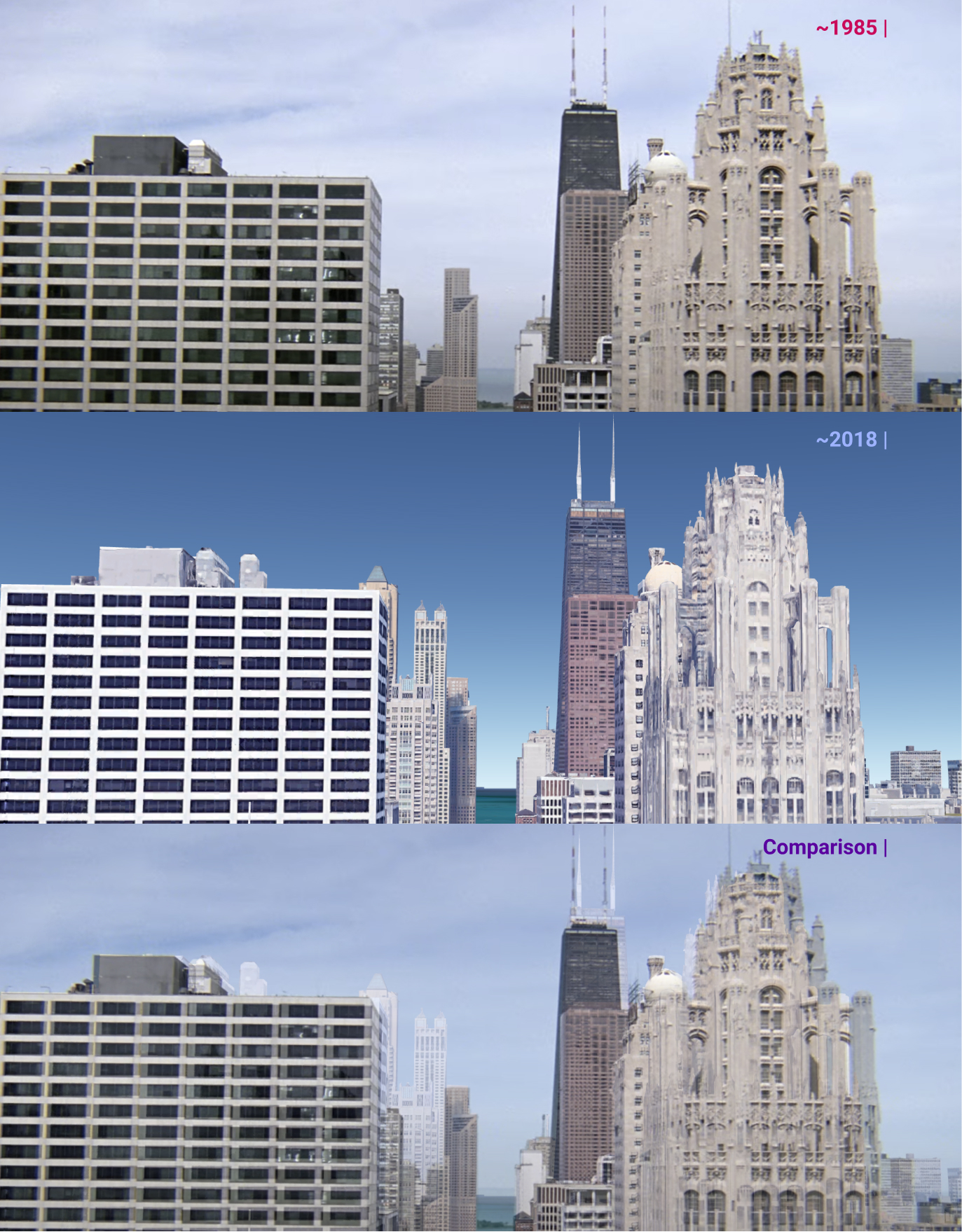 The third and final shot looks north, likely from a helicopter, towards Streeterville and Gold Coast along Michigan Avenue. Most of the buildings to the right of Michigan Avenue, like 875 N Michigan Avenue (previously the John Hancock Center) and Tribune Tower, are in both versions. However several of the taller residential buildings in the background to the left, like the 871-foot-tall 900 N Michigan Avenue and the 844-foot-tall Park Tower, were not built until 1989 and 2000, respectively.

The skyline shots above provide a glimpse of how 35 years can pass by quickly, and shows the need to stop and compare every once in a while, to avoid overlooking obvious differences and missing nuances.