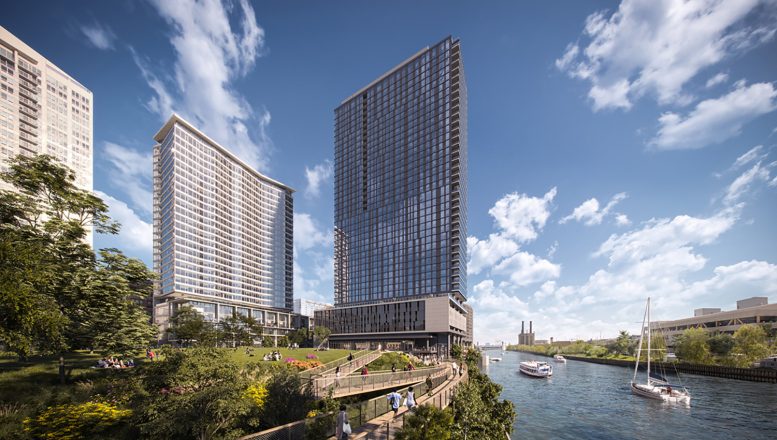 The Reed (234 W Polk Street). Rendering by Perkins + Will

Renderings have been revealed for The Reed, the second residential tower at Southbank, as the entire development takes the 11th spot in YIMBY’s Chicago’s tallest developments countdown. Located on a 7.5-acre, waterfront site, Southbank is a megadevelopment that was split off from the original Riverline joint venture development by Lendlease and CMK Companies. The parcel is bound by W Harrison Street, S Wells Street, W Polk Street, and the Chicago River. 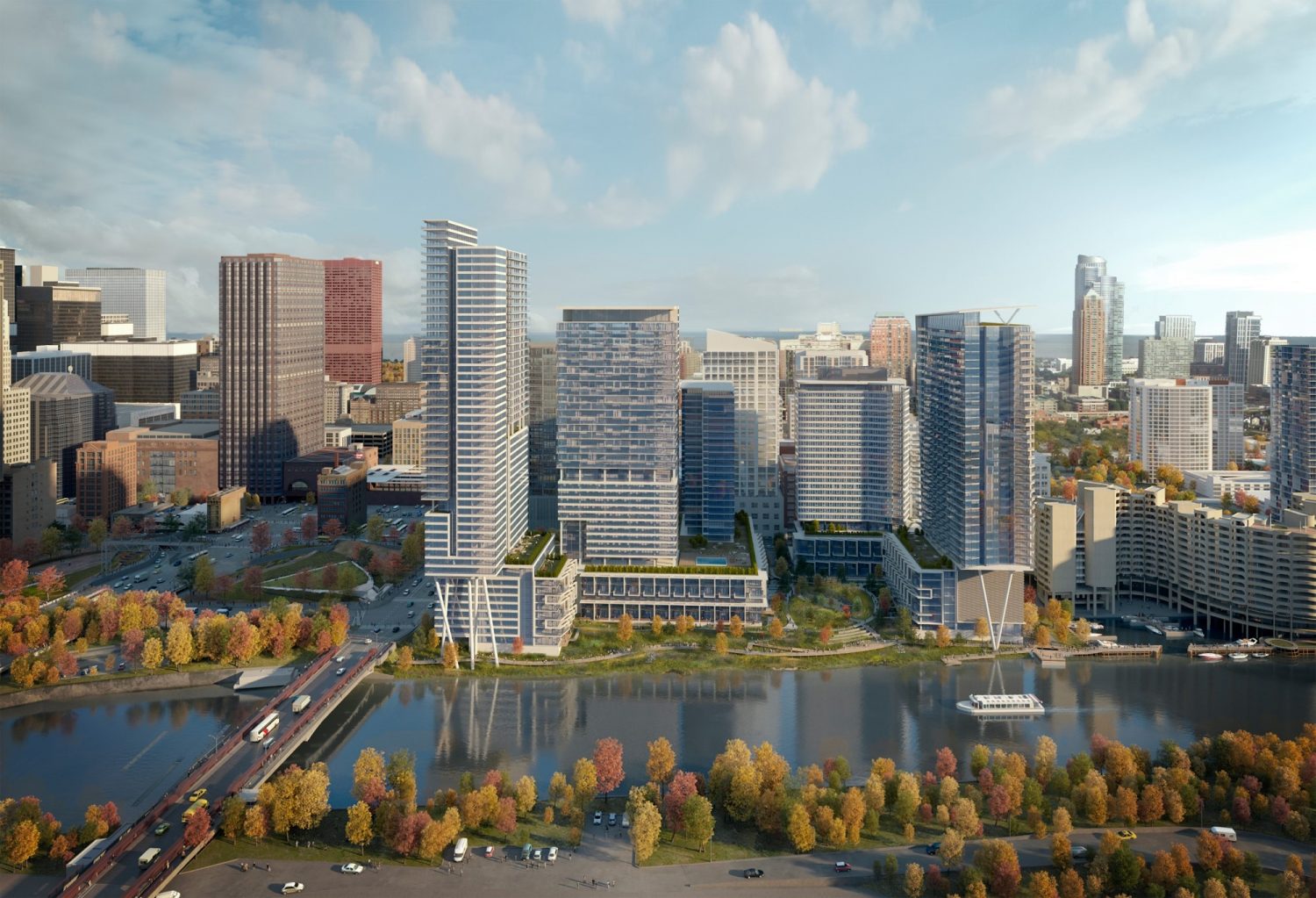 Master planned and designed by Perkins + Will, the development includes the proposal of multiple towers on site. The tallest building planned for the site, Building A, is expected to rise 598 feet with 51 stories. The next building, Building B, is proposed to rise 418 feet and 38 stories. A third proposed building, dubbed Building C, is expected to be 296 and 26 stories tall. The Cooper, originally Building D in the plan, was completed in 2018 and rises 321 feet over 29 stories.

The Reed, known as the 41-story Building E in the original plan, will rise 440 feet tall at the southern end of the site. Addressed at 234 W Polk Street, the building will be connected to the adjacent Southbank Park, a two-acre area of green space along the riverfront. The development will also extend the adjacent riverwalk, providing an activated connection to W Polk Street. 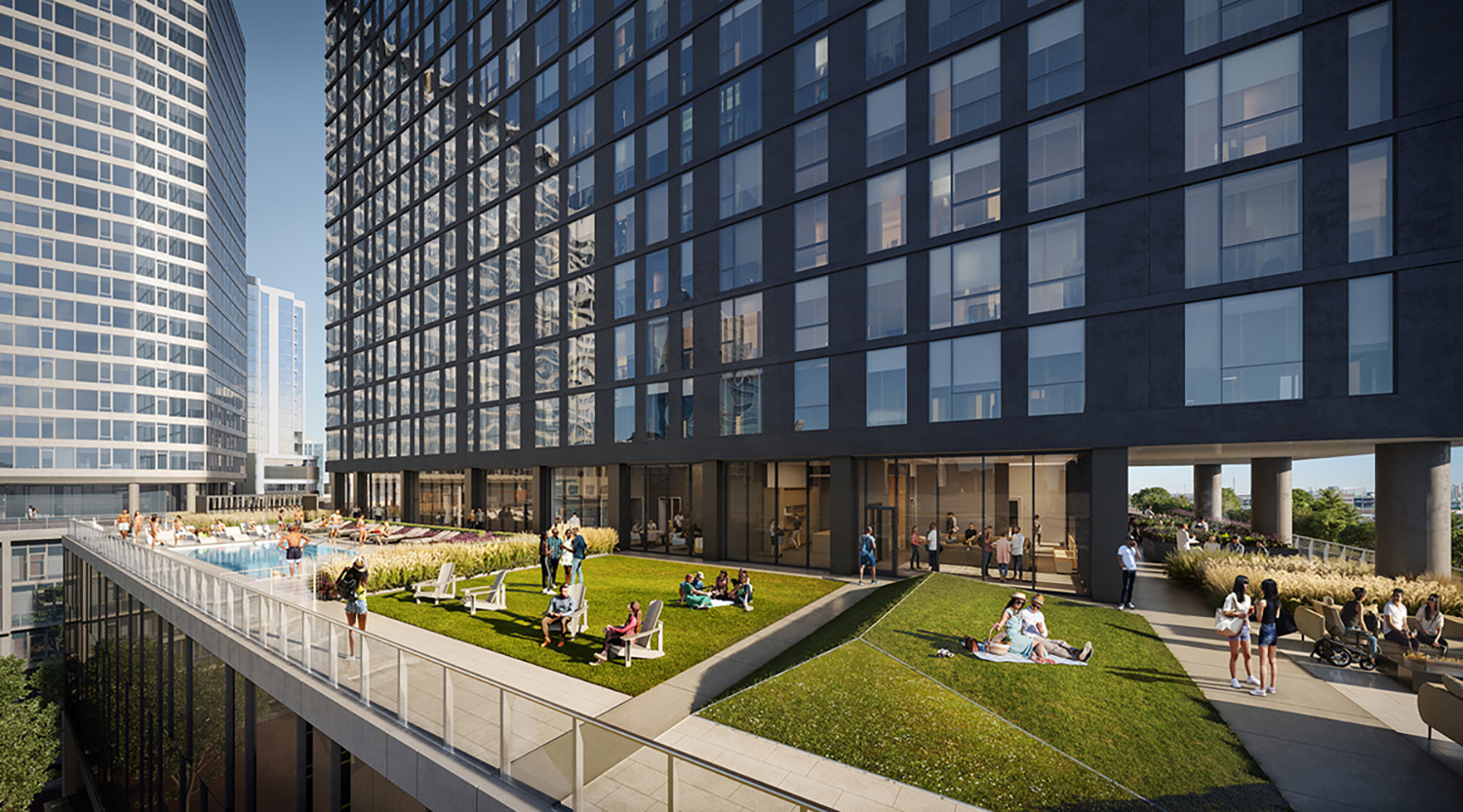 Exterior Terrace at The Reed. Rendering by Perkins + Will

The tower will hold 216 condominiums from floors 23 through 41, with 224 rental units on floors nine through 22. Condo layouts include one-, two-, and three-bedroom plans with prices starting in the $390,000s and ranging in size from 630 to 1,670 square feet. The Reed’s condominiums feature floor-to-ceiling windows that showcase views of the skyline, Lake Michigan, and Chicago River, as well as Southbank Park, which borders the northern side of the building. The tower’s interiors pay homage to the surrounding neighborhood with an industrial-chic aesthetic that is realized through concrete ceilings and metal finishing throughout the residences. 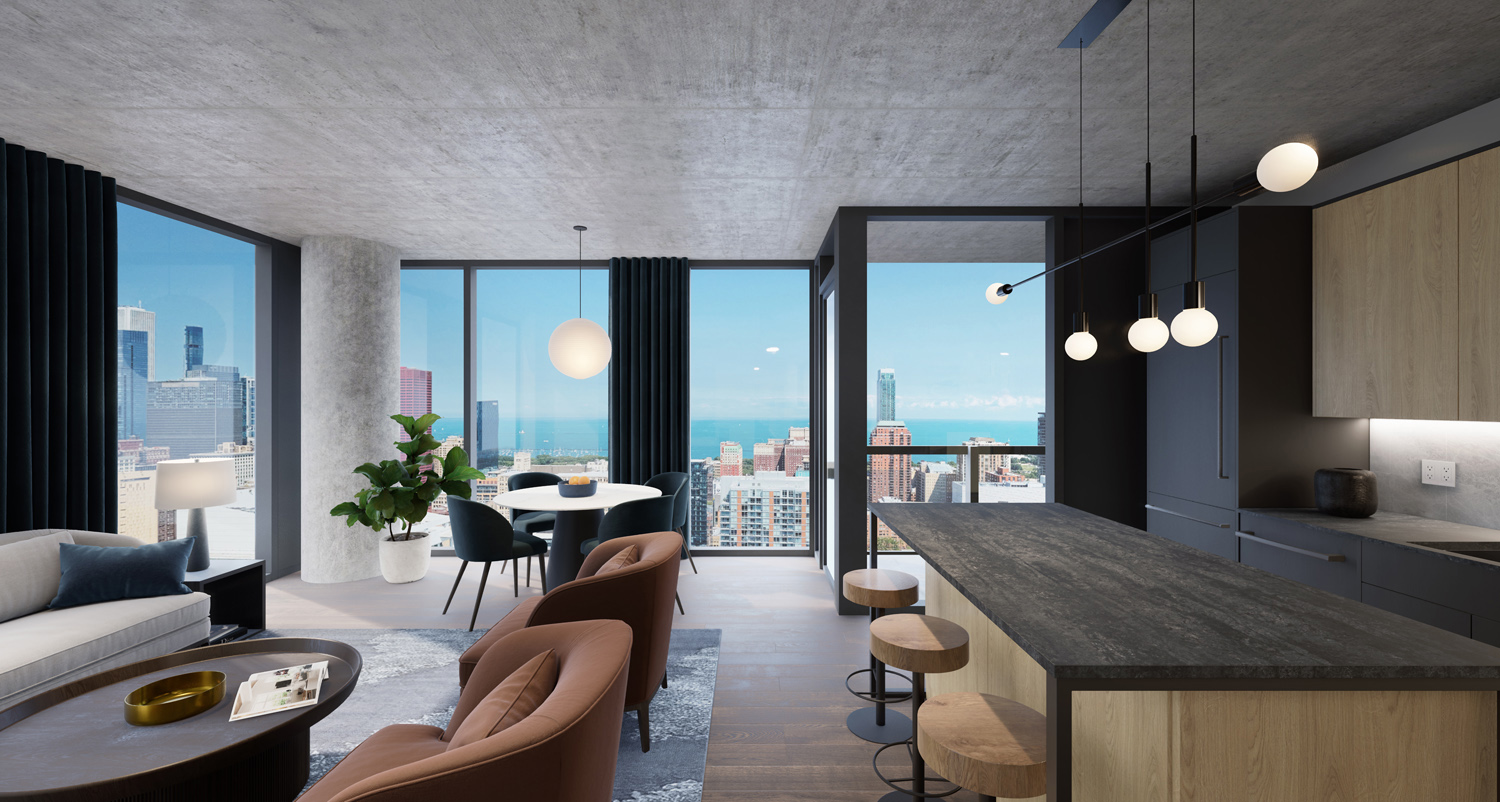 Interior Residence at The Reed. Rendering by Perkins + Will

The Reed contains two amenity suites for residents, including a 12,000-square-foot outdoor amenity deck on the eighth floor overlooking Southbank Park. Residents will share access to an indoor amenity space on the eighth floor and owners will have exclusive use of an additional amenity space on the second floor, which is at grade with Southbank Park. The intentional placement of the second-floor amenities and use of full-height windows is intended to establish continuity between the park and tower. 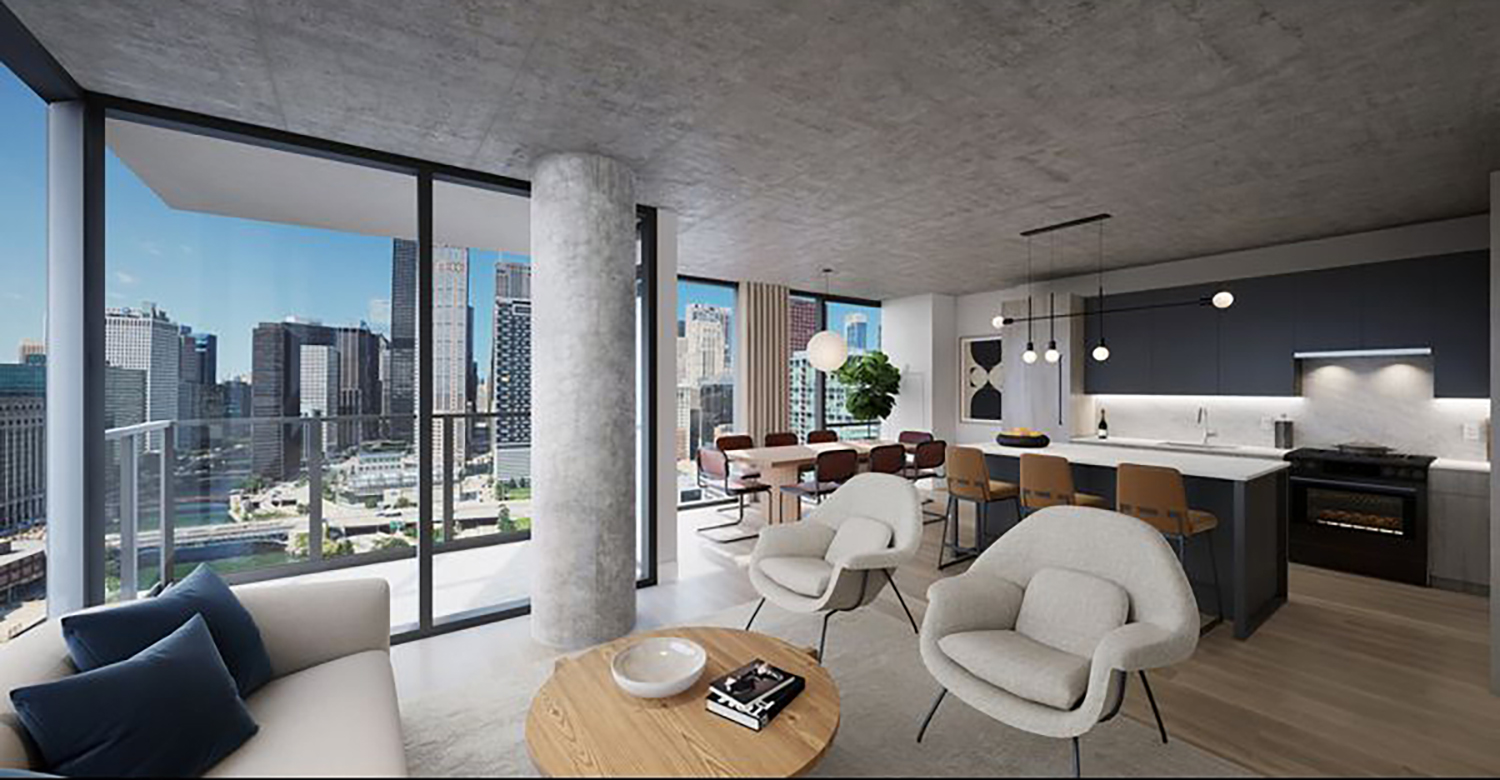 Interior Residence at The Reed. Rendering by Perkins + Will

The Reed’s design integrates with the first phase of Southbank. Its color and solidity provides diversity to the site and a balanced contrast to the lighter materials selected for The Cooper. The patterning of the tower’s north, south, and east facades shifts between residential tiers, while the all-glass western facade extends out to celebrate the river and the site’s dynamic views. 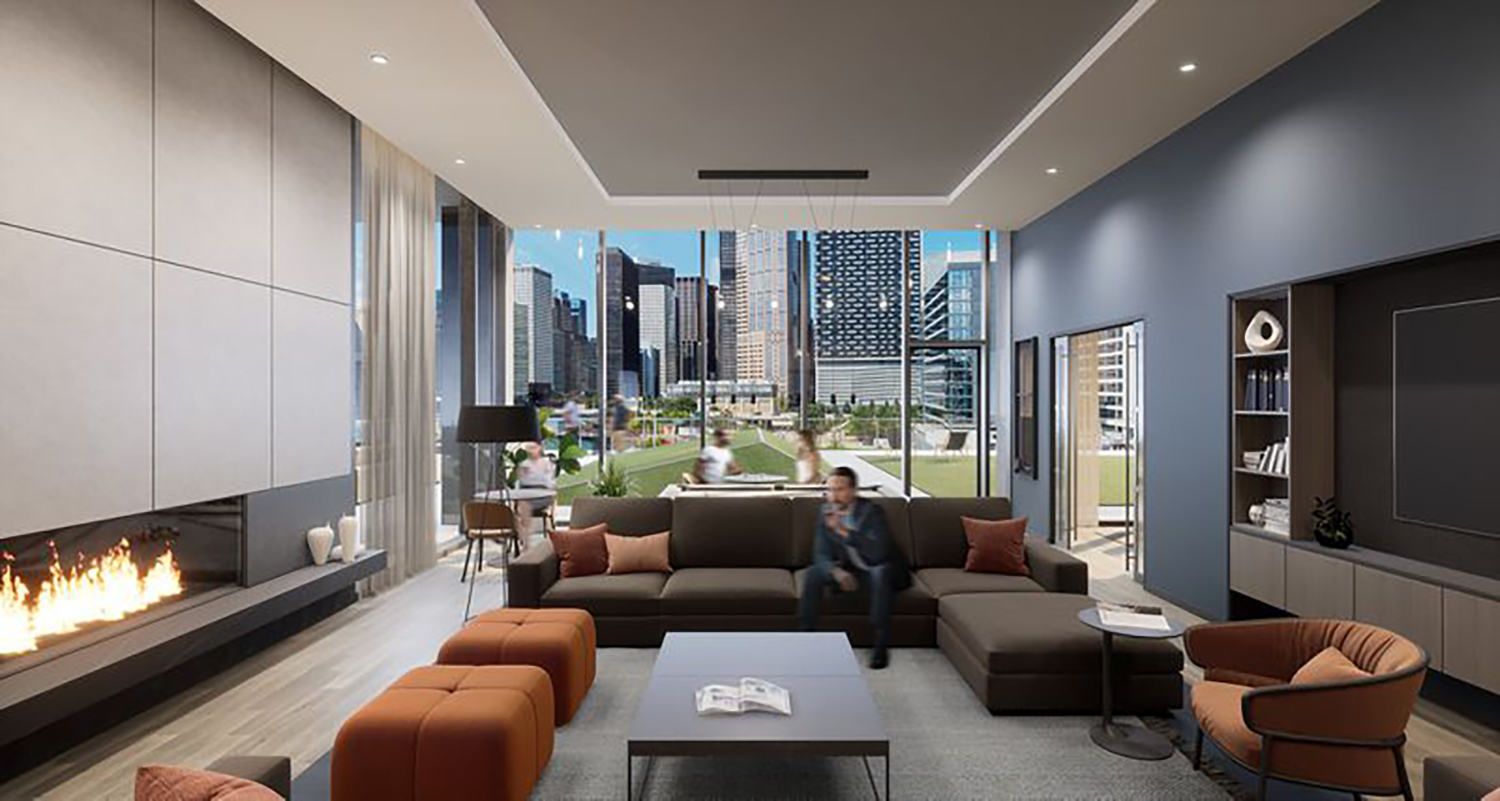 Eighth Floor Amenity Space at The Reed. Rendering by Perkins + Will

The design of the ground-floor lobby, located off W Polk Street, responds to its position along the Chicago River with floor-to-ceiling windows overlooking the adjacent waterway. To enhance the pedestrian experience, the building is cantilevered above a widened pathway along W Polk Street, creating an inviting outdoor plaza with seating, landscaping, and river views. This walkway wraps around the entire western side of the building, whose lower floors are set back from the river, creating a connection between the riverwalk and W Polk Street. Lendlease plans to improve the adjacent W Polk Street pier with a new water taxi stop, continuing Chicago’s transformation of the river. 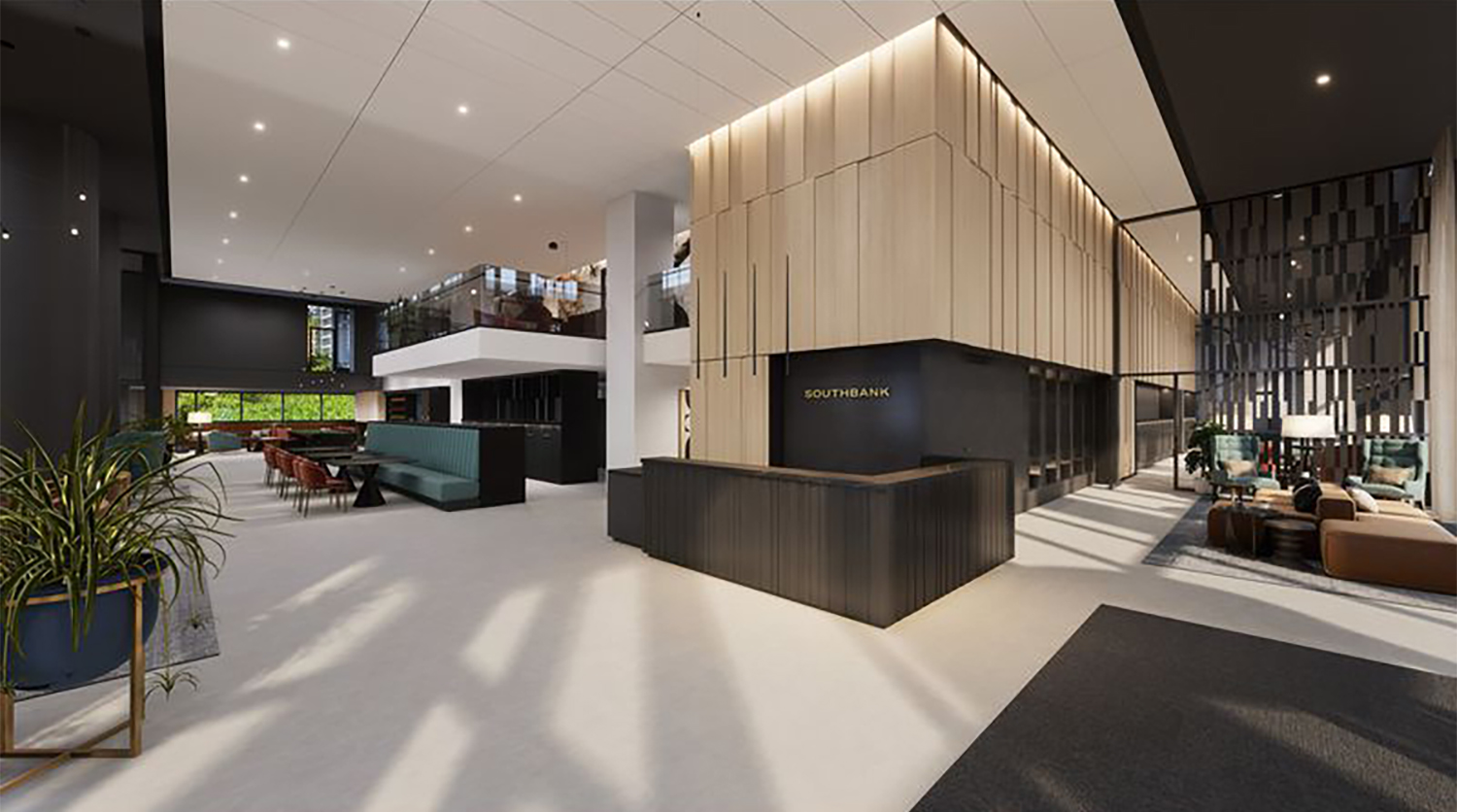 Lobby at The Reed. Rendering by Perkins + Will

The riverwalk extension was developed by Lendlease in conjunction with Southbank Park, serving as the flagship offering within the Southbank neighborhood. Designed by Hoerr Schaudt Landscape Architects, the publicly accessible green space features a central lawn, bicycle racks, and meandering walkways that lead down to the riverfront. The riverwalk itself is programmed with a viewing platform, seating areas, and a natural stone amphitheater created from lannon stone. The stone was uncovered during construction of the park, which originally served as the foundation of Chicago’s Grand Central Station and operated on the site from 1890 to 1969. 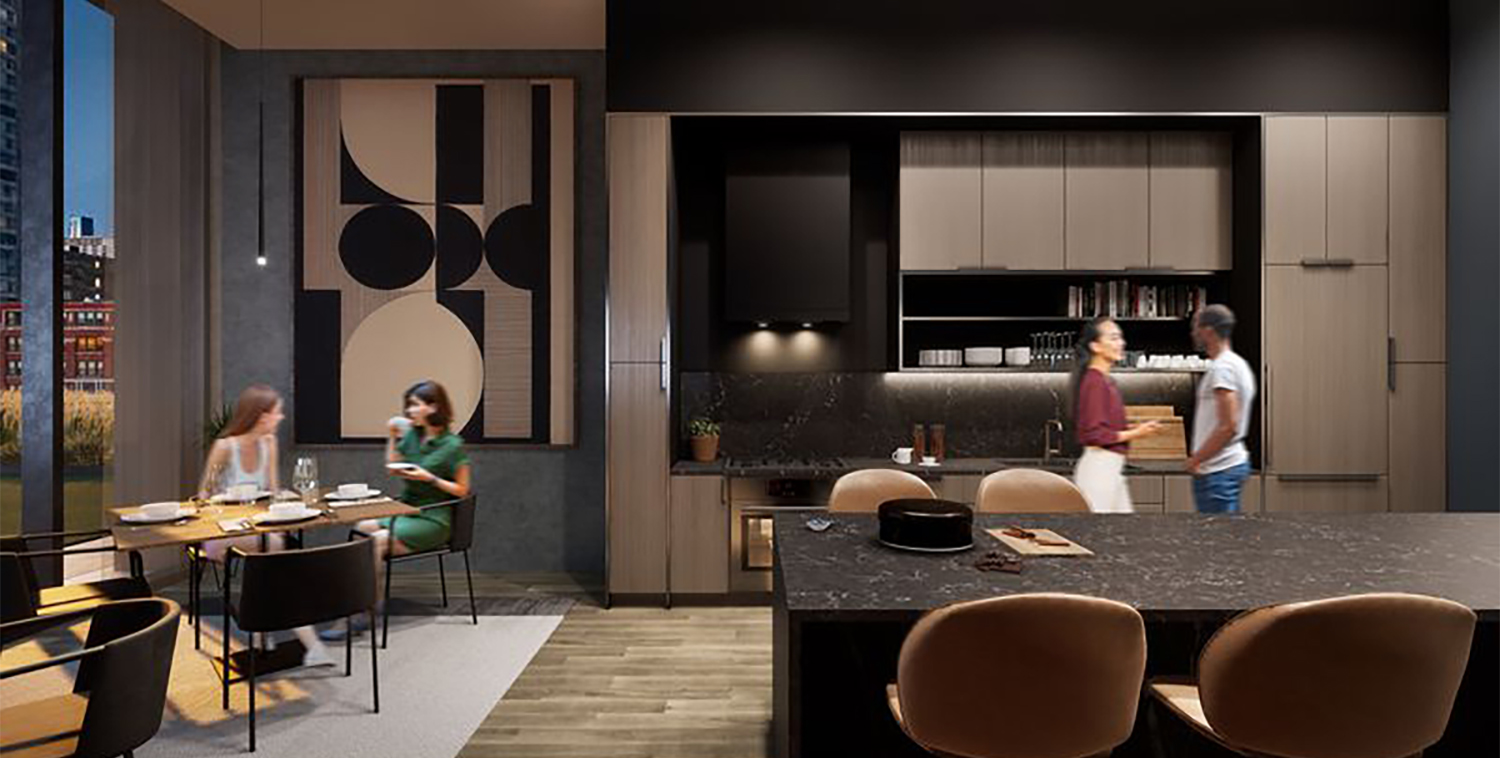 Amenity Kitchen at The Reed. Rendering by Perkins + Will

The Reed is targeting LEED Gold and FitWel certification. Additionally, residences will include low-flow plumbing fixtures, Energy Star-rated water heaters and appliances, and heating and cooling equipment efficiency rated 10 percent higher than the code minimum. There will also be a rooftop farm, through which residents and local restaurants will have access to fresh honey and produce grown on site.

Lendlease expects to begin construction in late spring. It will take about two years to build, with a projected move-in date of summer 2023.