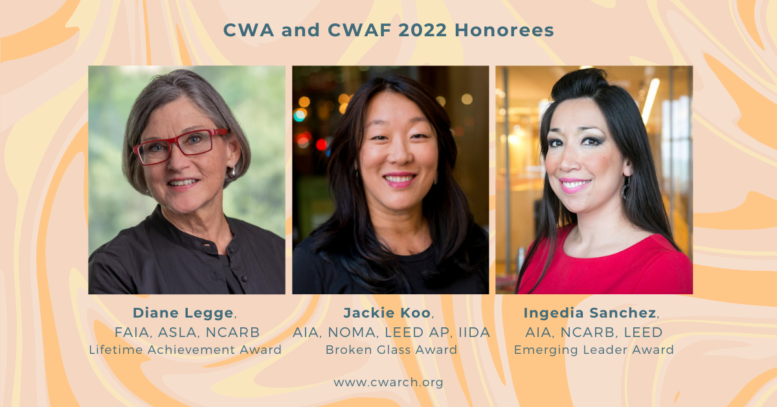 Late last week the Chicago Women in Architecture (CWA) and The Chicago Women in Architecture Foundation (CWAF) announced the recipients of the 2022 CWAF Lifetime Achievement Award, as well as the announcements of two inaugural awards: the Broken Glass Award and the Emerging Leader Award. According to the announcement, each program honors Chicago women architects at varying stages in their careers who have “played pivotal roles in advancing the profession through resolute leadership, mentorship, design excellence, and advocacy.” Each honoree has been selected for the caliber of their work, as well as the impact on the greater architectural community.

This year, the Lifetime Achievement Awardee is Diane Legge, FAIA, ASLA, NCARB, an architect, landscape architect, and urban planner with over 50 years of experience across the United States and Asia. Legge was trained at Wellesley College, Stanford University School of Engineering, and Princeton University where she received her Master of Architecture degree. Legg, who joined Skidmore Owings & Merrill (SOM) in the 1970s, was the first woman partner of SOM in 1982. She continued her career as the owner and principal of DLK Civic Design, a woman-owned design practice. In 2010 Legge joined CallisonRTKL in Shanghai, China, and later opened the CRTKL office in Hong Kong, before returning to the US in 2019. Legge’s projects in Chicago include the reconstruction of Wacker Drive, Arlington International Racecourse, McCormick Place North, and the Harold Washington CTA Station.

Jackie Koo, AIA, NOMA, LEED AP, IIDA, founding principal of KOO, an award-winning integrated architecture, design, and urban design firm will be the 2022 Broken Glass recipient. Koo’s diverse practice is grounded in hospitality and the desire to create a specific identity for each project. Notable work includes the Wit Hotel, the Sable Hotel, located on Chicago’s historic Navy Pier, and the Altgeld Gardens Family Resource Center. In 2020, Koo was named “Chicagoan of the Year in Architecture” by the Chicago Tribune for her contributions to the adaptive reuse of Old Cook County Hospital. She currently serves on the City of Chicago’s first Committee on Design and on the Board of the Chicago Architecture Biennial. Koo received her undergraduate degree in Philosophy from the University of Chicago and her Master of Architecture from the University of Illinois at Chicago.

The first recipient of the Emerging Leader Award will be Ingedia Sanchez, AIA, NCARB, LEED, associate architect at SOM and director and past president of Arquitectos – The Society of Hispanic Professional Architects. As director, Sanchez supports members on their path to licensure to increase licensed Latino and Hispanic architects, collaborates with professional organizations to bring the architectural community together, and advocates for the elevation of Latino and Hispanic designers into leadership positions. Sanchez also mentors university students and young professionals. She frequently guest lectures and leads project critiques, and coordinates firm tours and as well as portfolio reviews. Sanchez has been involved with several distinct projects in the US, Middle East, Europe, and Asia, including the Burj Khalifa, 401 Wabash Tower, Tower 535, Roche AMF, Hangzhou Gate, and the O’Hare International Airport expansion. Sanchez is motivated by sustainability and high-performance design, which she incorporates into her building enclosure expertise and holistic design approach.

The awardees will be honored at the CWA and CWAF’s Annual Spring Brunch. This brunch will be held both virtually and in-person on Saturday, May 14. Legge will provide a keynote presentation, and separate programs in the summer and fall will highlight Koo and Sanchez. Information regarding the event, ticketing, and sponsorship opportunities can be found at www.cwarch.org. Proceeds from ticket sales for the Spring Brunch support CWA membership events and related programming.

Be the first to comment on "Chicago Women in Architecture Honor Diane Legge, Jackie Koo and Ingedia Sanchez"